Buttress roots and palm groves are features of the rainforest of Tamborine National Park. 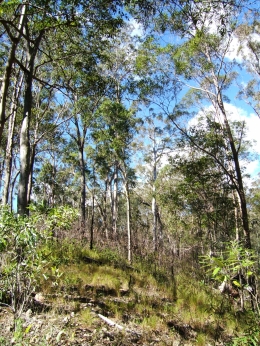 Tamborine Mountain’s ancient uprising is the result of eruptions from a huge shield volcano in the Mount Warning area of northern New South Wales about 20 to 23 million years ago. Eruptions smothered the surrounding landscape with layers of basalt lava flows. By the time the eruptions had ceased, this Tweed Volcano had risen to a height of 2km and a diameter of about 100km, forming a vast dome stretching south to Lismore, west to Mount Lindsay and north to Tamborine Mountain.

Twenty million years ago, after the volcano became extinct, water took over as the primary force shaping the landscape. Rain fell, forming streams that radiated off the dome, like the spokes in a wheel. Over time the streams became deeper and broader, gradually eroding the dome, forming valleys and gorges. Where streams approached each other, sections of the dome became isolated, forming 'land islands' or plateaus like Tamborine Mountain.

Tamborine Mountain is home to 10 different types of forest including subtropical rainforest, wet eucalypt forest and open eucalypt forest. Incredibly, these forests contain more than 900 different species of plants representing 65 per cent of all the plant species found in the ‘mega-diverse’ Gold Coast area.

The Palm Grove section is named after the piccabeen palm Archontophoenix cunninghamiana that grows abundantly here. These palms have aerial roots that are exposed above the soil surface. This unusual feature allows them to absorb oxygen despite the waterlogged soils of this area.

Open eucalypt forest grows on the exposed north-west cliffs of The Knoll. Huge eucalypt trees including flooded gums, spotted gums, scribbly gums, bloodwoods and ironbarks dominate this dry forest. A large amount of sunlight streams through the open canopy, allowing wattles and kangaroo grass to flourish on the forest floor.

The Knoll also contains stands of the forest she-oak Allocasuarina torulosa. The small brown cones and winged seeds of this tree are an important food source for glossy black-cockatoos Calyptorhychus lathami.

The Knoll is home to one of Australia’s beautiful native flowering trees, the lacebark Brachychiton discolour. In summer this deciduous tree is covered in large pink bell-shaped flowers and is a valuable food plant for tailed emperor butterfly Polyura sempronius larvae.

Instantly calming, the peaceful subtropical rainforest of the MacDonald section is the perfect place to relax and discover a fascinating and rich ecosystem. Giant trees such as strangler figs and yellow carabeens rise as high as 30m into the sky, blocking out the sunlight with a ceiling of leaves. A shady, humid world exists beneath the closed canopy. Climbing vines and epiphytes cling to the giant trees high above the ground where light is easier to come by. Delicate ferns and fungi cluster on the darkened rainforest floor. Lush groves of piccabeen palms thrive along streams and in other waterlogged areas. 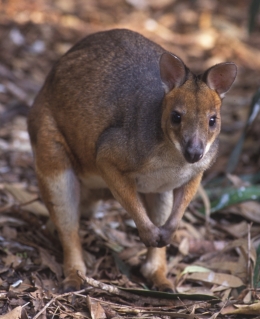 The forest communities of Tamborine National Park also provide important habitat for wildlife and are essential refuges for native animals from surrounding urban and rural development.

While walking in the cooler months, you may be rewarded by hearing the song of the near threatened Albert’s lyrebird Menura alberti. The lyrebird is an excellent mimic, intermingling its own calls with other rainforest noises including the calls of bowerbirds, whipbirds and rosellas. The lyrebird’s call is distinctively clear and powerful, sounding like many different birds calling in quick succession. During the winter months, male lyrebirds showcase their remarkable vocal abilities in an attempt to attract and impress potential female mates.

The lyrebird is a poor flyer, so vigilantly keeps watch for danger while foraging for invertebrates and frogs in the damp leaf litter. The female lyrebird usually positions her dome-like nest of sticks, moss and ferns on rock ledges, between buttress roots or on top of tree ferns. The nest is well camouflaged to ensure the single egg or chick it contains is hidden from predators. With exceptional hearing and sight, lyrebirds can quickly detect danger. The nest is typically built with a clear downward escape route which the female lyrebird uses to flee from approaching predators and draw attention away from her precious young.

Often seen scratching through leaf litter on the rainforest floor, the Australian brush-turkey Alectura lathami uses its large, clawed feet to search for insects and seeds. Look for a brush-turkey mound—a huge pile of leaf litter used to incubate eggs—scratched together by the tireless male.

One of Tamborine Mountain’s more commonly seen nocturnal animals is the short-eared brushtail possum Trichosurus caninus. At night, these large brown or black possums forage on the ground and in trees for leaves, ferns, fruits and fungi.

At night, white-striped freetail bats Tadarida australis come out to feed, flying above treetops as they hunt their insect prey. These chocolate-brown microbats roost in tree hollows and under the loose bark of mature eucalypt trees. Old growth trees provide hollows, essential nesting sites for animals such as bats, owls and gliders.

Red-legged pademelons Thylogale stigmatica are small wallabies mostly found within rainforests. In the early morning and late afternoon, they are likely to be seen feeding on native herbs and grasses at the forest’s edge. From mid-morning to afternoon, you may spot one sleeping with its tail between its legs, leaning forward with its head resting on the ground.

During the day, shy red-necked pademelons Thylogale thetis use the dense rainforest to hide from predators while feeding on leaves and fruits from the forest floor. If disturbed, pademelons make a loud thumping noise with their hind feet, sending out a warning as they flee to safety. After dark, these cautious creatures venture to the more open forest edge to feed on grasses.

Australia’s largest skink, the land mullet Egernia major, can be seen basking in patches of warm sunlight on the forest floor. Its distinctive dark colouring acts as camouflage and helps it absorb heat from the limited sunlight available.

If you’re lucky, you may catch a glimpse of the vulnerable tusked frog Adelotus brevis. Tusked frogs get their name from the enlarged pair of teeth or ‘tusks’ found in the lower jaw of males, which they use to defend their territory. This ground-dwelling amphibian grows to only five centimetres in length and spends its days hiding among logs, stones and vegetation along the creek.

Preferring the shaded rainforest gullies of The Knoll, the cascade treefrog Litoria pearsoniana may be heard calling from vegetation along the creek’s edge. This small green and brown frog is largely restricted to mountain rainforest streams.

It is one of several stream-dwelling frog species in South East Queensland that are experiencing population decline.

While visiting the rock pools at Cedar Creek, look for the long-finned eel Anguilla reinhardtii swimming in the shadows. Long-finned eels begin their life far out at sea, riding the currents down Australia’s east coast in search of estuaries. Young eels (called elvers) must undertake a gruelling upstream migration, wriggling up waterfalls and travelling over wet ground to find sanctuary in freshwater rivers and creeks. After several decades, mature eels make one final journey downstream—travelling thousands of kilometres to return to the sea where they were born—to breed and die.

As you walk through the forest you may hear strange gurgling sounds coming from the ground. These noises are the result of giant Tamborine earthworms travelling through their waterlogged, underground burrows. These worms can grow more than a metre in length. They leave spiralled piles of soil spheres on the ground as they feed.

During an overseas trip in 1878, local pastoralist Robert Martin Collins was inspired by accounts of Yellowstone National Park, the world’s first national park established in the United States of America in 1872. When Collins returned to Australia, he began campaigning for the creation of national parks in Queensland to preserve the majestic mountain forests of the McPherson Range south of his home.

In 1896 Collins was elected to the Queensland Parliament where his campaign continued. Unfortunately, he was fighting for an ideal that in Queensland was without precedent, but not without opposition. Although some were sympathetic to the new ideal, many others thought the concept of environmental conservation was dangerous. However, Collins and others persisted and in 1906 State Government finally passed the State Forests and National Parks Act.

Around this time Tamborine Shire Councillors, Sydney Curtis and Joseph Delpratt, had become alarmed at the amount of clearing taking place on Tamborine Mountain. On 15 June 1907, Council recommended that 154 ha of the mountain be set aside...

‘… as a national park for the preservation of the flora and fauna as owing to the way the land in the vicinity is being cleared it would seem that in the near future such an action would prove its necessity.’

The Director of Forests agreed, recommending that this area be protected under The State Forest and National Parks Act of 1906 as a national park in October 1907.

Witches Falls was declared a national park in the Government Gazette on 28 March 1908, becoming the first national park in Queensland—30 years after Collins first heard of the concept in the United States.

What’s in a name?

The place name Tamborine is from the local Yugambeh language. It means wild lime and refers to the finger lime trees Microcitrus australasica that grow wild on the mountain. The spelling appears on early records as Jambreen, Tchambreem, and even Goombireen, but is recognised now as Tamborine.

Tamborine was eaten by Yugambeh people as a thirst quencher. It was one of the fresh foods traded to the settlers for cooking and jam-making. Despite its sour taste, children relished the fruits and preferred to eat them with salt.

Wonglepong is another name for Tamborine Mountain. In Yugambeh language it means ‘hearing wrong way’ and describes the reverberation of sound as it echoes around the mountain.

The mountain’s rainforest plants provided food and resources for Yugambeh people, while marsupials and reptiles were hunted for food. Piccabeen fronds made excellent baskets for carrying water, food or honey. The lawyer-cane vine, also known as wait-a-while, was used for basket-making after the spikes had been removed.

Yugambeh people still walk the land of their ancestors, telling stories and reminding visitors that this land is our shared heritage. An annual pilgrimage, the Drumley Walk, takes bushwalkers from Beaudesert to Southport via Tamborine, through scenic rainforests, rolling plains and open woodlands. The walk, in honour of Billy Drumley, an Aboriginal ancestor from the Yugambeh region, encourages a better understanding of our environment and First Nations peoples' heritage.