A half day’s drive from Brisbane, there’s an outback adventure just waiting to happen. At Sundown National Park, you and your kids can unplug from your ‘everyday’ (no mobile connection here!) and reconnect face to face (not phone to phone) in the vastness of a breathtaking landscape. Photo credit: © Queensland Government 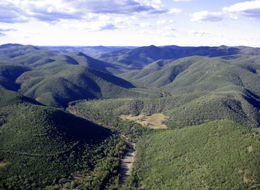 Dry ridge top vegetation is very different to that inside gorges or along the river. 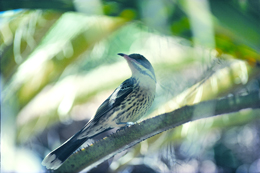 Mine shaft at Beecroft mine.

High traprock country along the Queensland – New South Wales border has been carved by the Severn River and numerous creeks into sharp ridges and spectacular steep-sided gorges. Traprock is a hard, dense rock formed from ancient marine sediments modified by heat and pressure. Intense minor faulting, folding and weathering have resulted in the layered rocks forming the steep ridges and gorges along the river.

Jibbinbar Mountain in the park’s north-west and the deeply-eroded Red Rock Gorge are intrusions of granite into the trap rock. Two granite dykes run roughly parallel through the area. The most noticeable forms Rats Castle, a local landmark, and can be traced through the park and under the road near the southern entrance.

The remote character of Sundown National Park and Sundown Resources Reserve (15,275 ha in total) is maintained by keeping development to a minimum.

A gradual change in vegetation from north to south reflects the differing climate, elevation and soil types of Sundown National Park. Eucalypt forests of yellow box, brown box, stringybark and Tenterfield woollybutt grow on the higher northern slopes. While in the south, there are woodlands of Caley’s and silver-leaved ironbark, tumble-down red gum, white box and cypress pine. Wilga, native willow and ooline (a vulnerable species) also grow at the southern end of the park but are usually associated with drier inland areas.

Throughout the park, kurrajongs, red ash and larger wattles grow over an understorey of hop bush, dead finish and peach bush. Steep-sided gorges shelter vine scrubs in which figs, stinging trees, pittosporums and numerous vines are common. Donkey, waxlip, greenhood, spotted hyacinth and other ground orchids flower in spring. Cymbidium orchids are widespread and king orchids can be found on rock faces in the gorges. River red gum, river oak, tea tree and bottle brush grow along the river.

More than 150 species of birds can be found in Sundown—some throughout the park and others only in specific habitats. Spotted bowerbirds, red-capped robins, spiny-cheeked and striped honeyeaters, and red-winged parrots inhabit the drier southern areas. Black ducks, wood ducks, herons, cormorants and tiny azure kingfishers live along the river. Superb lyrebirds inhabit suitable areas in the centre and north of the park.

Wallaroos are common in the steep rocky country while eastern grey kangaroos can be seen in less sloping habitats. Other macropods include red-necked and swamp wallabies. Once common, brush-tailed rock-wallabies survive in small colonies in the northern end of the park, including near Nundubbermere Falls. Marsupial mice, gliders and possums can also be seen.

The Sundown area was once part of Mingoola, Nundubbermere and Ballandean stations. These holdings were subdivided into smaller leasehold blocks in the late 1800s. Although much of the Sundown area was cleared for grazing and fine wool production, these ventures proved uneconomical.

Mining of mineral deposits—principally tin, copper and arsenic—occurred sporadically at Sundown from the 1870s. While rich pockets of ore were found and more than 70 men employed for a short time, deposits were mainly low grade and the mines were never successful. Old surface diggings are scattered throughout the Red Rock area and remains of mining activity can be seen from the 4WD track.