Myrtle rust—a fungal disease affecting many native plants—has been found in this park. The disease poses a significant threat to the Wet Tropics World Heritage Area. Learn more about myrtle rust and how to minimise its spread. Photo credit: Tourism Tropical North Queensland 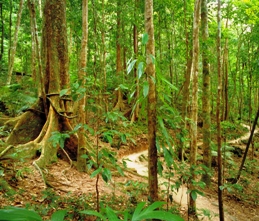 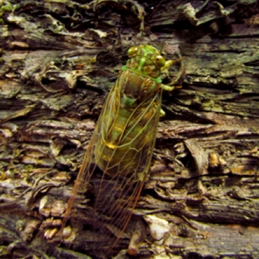 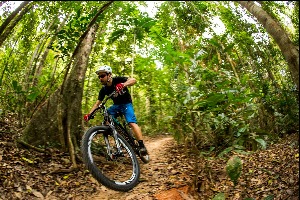 Mountain biking has been a popular activity in this park since prior to its gazettal.

The tropical rainforest gullies and sclerophyll and woodland forests of Smithfield Conservation Park provide interest for scientists and recreational users alike. The park is characterised by two, distinct topographic features—the flat, alluvial plains of Atika and Moon creeks and a high relief that rises approximately 350m in altitude at the top of the coastal ridge. The steep, vegetated ridges of the park form an important scenic backdrop to Trinity Beach and Smithfield suburbs.

Vegetation communities are influenced by soil type and moisture. The park is characterised by open forest and woodland dominated by eucalypt species such as pink bloodwoods Corymbia intermedia, Moreton Bay ash Corymbia tesselaris and Eucalyptus tereticornis; and, in moister areas, by vine forest with these species emerging above the canopy. In areas of different soil type, open forest is dominated by pink bloodwoods and large-fruited red mahogany Eucalyptus pellita or black wattle Acacia mangium and swamp box Lophpstemon suaveolens. In the moister areas, these species emerge above the canopy of vine forest.

Fifty resident and migratory species of birds have been recorded in the park. Species of conservation significance include the near threatened (rare) Australian swiftlet Aerodramus terraereginae and the vulnerable Macleay’s fig-parrot Cyclopsitta diophthalma macleayana.

Australian swiftlets are small birds that spend most of their waking hours in flight on long scythe-like wings. They feed on small flying insects and drifting spiders, foraging in flocks over rainforest edges, gullies and beaches. Swiftlets breed in large colonies in caves, or sometimes among boulders, with nests made from saliva mixed with grasses, twigs and feathers.

Macleay’s fig-parrots are usually seen above the forest canopy or feeding among the branches. Noisy in flight, these colourful birds are quiet when feeding; the only indicator of their whereabouts is the steady rain of fruit and seed husks falling to the ground. When nesting, Macleay’s fig-parrots excavate a short, narrow tunnel into a rotten trunk or a dead tree limb.

During the warmer months, the most obvious (but least visible) animal in the park is the cicada. A large insect with membranous front wings, the cicada is notable for its high-pitched drone that is one of the most commonly heard sounds of the forest. Adult cicadas have loud noisemakers called tymbals (modified sections of the exoskeleton) on the sides of their abdomen. The cicada rapidly vibrates these tymbals and its body acts as a resonance chamber to greatly amplify the sound, giving rise to the cicada’s distinctive song.

In the past, a small area of what is now Smithfield Conservation Park was used for quarrying. During World War II part of the area was used by the Australian Armed Forces as a bombing range.

Located adjacent to James Cook University, the park has been used extensively for educational activities and scientific research since its gazettal in 2000. The history, especially Aboriginal culture and use of natural resources, is of particular interest for educational activities. The park, in conjunction with adjacent university land, is also used as an on-going study site for cyclone and climate change research, remote sensing of fire damage and habitat mapping.

The park is utilised mainly by locals for walking, jogging and bike riding. In recent years, Smithfield Conservation Park has become a very popular site for mountain-bike riding. With the involvement of the Cairns Mountain Bike Club, the trails are being maintained and upgraded to world-class (International Mountain Biking Association IMBA) standards under the Smithfield Conservation Park Maintenance Environmental Management Plan. The park is the club’s official base and has an area consisting of 30–40km of cross country trails and a world cup level downhill course. These trails are used during events throughout the year and are available for recreational use anytime. To date, two major national and international (World Mountain Biking Championship) events have been successfully held in the park. Smithfield Conservation Park is an important part of the growth of mountain biking in North Queensland.