Piccabeen palms and an abundance of vines, ferns and elkhorns thrive in the dappled light beneath the forest canopy. 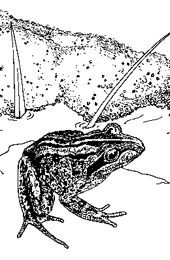 Pit saws were used in the early days to cut timber close to where it was felled. 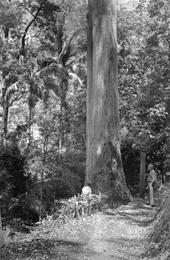 Ravensbourne National Park lies on a plateau of basalt capping a sandstone ridge off the eastern face of the Great Dividing Range. It is located at the head of Buaraba Creek and has numerous gullies and drainage channels which are mostly dry, except after heavy rain.

This small national park conserves a mere remnant of vast forests that once covered the slopes and crest of the Great Dividing Range. Surrounded by cleared farmland, Ravensbourne's towering trees, tiny jewelled fungi and birdsong from the canopy help us to appreciate the little that is left.

Groves of piccabeen palms and an abundance of vines, ferns and elkhorns thrive in the cool darkness below towering Sydney blue gums, tallowwoods and rainforest trees in the park's west and south-west.

Blackbutts, bloodwoods and forest red gums grow above sheoaks and wattles on sandy soils in the park's east.

Ravensbourne is known for its birdlife. At least 113 species of birds have been recorded at the park, including various pigeons, parrots, lorikeets and figbirds which help spread fruit seeds throughout the forest. Thornbills, fly-catchers and other small singing birds snap up insects or prise them from under bark. Black cockatoos feed on casuarina seeds while kingfishers wait patiently for hapless prey to come along.

Seven frog species have been recorded at Ravensbourne National Park. Listen closely after rain in summer and you might hear the soft toc...toc...toc...calls of the striped marsh frogs that live in creeks and gullies.

Snakes and lizards are often seen sunning themselves along the track or on exposed rocks. Twenty-two species of reptiles have been recorded at Ravensbourne.

Patches of grass adjacent to the rainforest are visited at night by red-necked pademelons, whereas red-legged pademelons feed mostly inside the forest on fallen leaves and fruit. Both rufous bettongs and long-nosed potoroos have been recorded in the park, but sightings of these are rare. Of the 35 mammals known from this area, you are most likely to encounter a swamp wallaby or whiptail wallaby thumping off into the bush when disturbed.

For thousands of years, the local Aboriginal people welcomed others passing through their country on the way to bunya nut festivals at the Bunya Mountains. Aboriginal people camped and gathered food in the Ravensbourne area for generations. Evidence of an Aboriginal yam digging site can be seen within the park.

From the 1860s and 1870s, timber-getters arrived to log the forests. Red cedar was so plentiful that Ravensbourne was known as 'Cedar Scrubs' or 'The Cedars'. Pit sawyers cut huge cedar logs into timber of manageable size before it was carted to Toowoomba via bullock dray. But after steam mills were established in Toowoomba, and later at Ravensbourne, entire logs were carted directly to the mills.

As well as cedar, other rainforest softwood species such as blackbean and rosewood were logged for use in cabinet making, and eucalypt hardwoods were felled for structural timbers.

After the Ravensbourne district was opened up for selection in 1889, precious little of the scrubs were spared from axe or fire in the quest to farm potatoes, maize or dairy cows on the rich red soils.

With its splendid vantage points, palm and fern-filled gullies and prolific birdlife, Ravensbourne became a popular place to visit. Gus Beutel was granted a one hectare special lease in 1924 on which he felled trees to establish a picnic area and create a lookout that now bears his name. Today at the Cedar Block day-use area you can still see the levelled site where a community dance hall and tennis court once stood.

Thankfully for us, and for future generations, the Highfields Shire Council lobbied to have the area reserved for scenic and recreational purposes. This push, coupled with the realisation by the Government that forests were being severely depleted, resulted in 91ha being declared as Ravensbourne National Park on 26 August 1922. Today the park is 687ha in size.