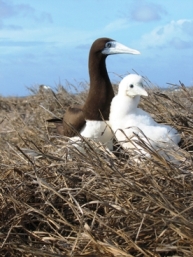 Raine Island is a highly significant seabird rookery. Eighty-four bird species have been recorded here at Raine Island since the first documented visit in 1842. Some species of seabirds present on Raine Island are not found on any other island within the Great Barrier Reef World Heritage Area.

For many years, the late Mr Brian King, from QPWS, studied seabirds on Raine Island and on other islands on the Great Barrier Reef. Much of his pioneering work at Raine Island was supported by the Raine Island Corporation and current studies are building on the results of this research. In 1993, with the support of Mr King’s family, the corporation established an encouragement award for student seabird research in his memory.

Tens of thousands of adult female green turtles come ashore each year to nest on Raine Island. The numbers of turtles nesting varies throughout the year, with the highest density nesting occurring during the mid-summer months. Researchers use various methods to measure nesting population size—a difficult undertaking in a remote location with large numbers of animals. Researchers have found large variation in the annual numbers of nesting turtles. These fluctuations correlate with the atmospheric phenomenon, El Nino, a climate pattern of temperature and pressure variations of the ocean’s surface in the tropical Pacific Ocean. In a typical dense nesting season, an estimated 41,000 females breed annually at Raine Island; while in a very high density nesting season, the annual nesting population would approximate 131,000 females.

The successful conservation of the green turtle breeding population depends not only on the management of Raine Island, but also on the rate at which this population is being harvested throughout its foraging region. These turtles travel from the waters of Indonesia, New Guinea, Vanuatu, New Caledonia and far northern Australia to nest at Raine Island. Individual green turtles may make migrations of up to 2600km.

Moulter Cay is a small, vegetated cay, supporting significant colonies of nesting boobies and terns during summer and winter, and providing additional habitat for green turtle nesting. MacLennan Cay is a small unvegetated cay, only suitable as a roosting site for seabirds. As turtles and seabirds are ground-nesting and easily disturbed by people, access to Raine Island and Moulter and MacLennan cays is restricted to those involved in essential management-related and conservation research. 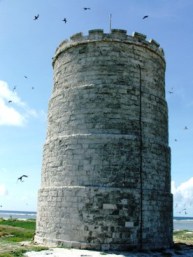 The convict-built stone beacon is the oldest European structure in Australia's northern tropics. 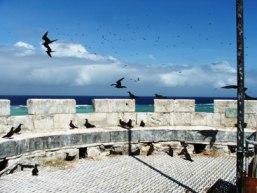 Seabirds make use of the tower today. The tower stands sentinel on this remote part of the reef.

The islands, reefs and waters of the outer barrier reef were extensively used for harvesting turtles, pearls, trochus, and later also beche-de-mer (sea cucumbers). Names of eastern Torres Strait Islander and mainland Aboriginal people carved on the historic stone beacon that stands on Raine Island today reflect how far they travelled by vessel in the 1800s.

Raine Island is located in a remote area of the Great Barrier Reef that was the site of numerous shipwrecks, particularly during the 1800s, and even today remains poorly charted.

Raine Island is the site of the oldest European structure in the northern tropics of Australia—a stone beacon. The beacon was designed as an aid to shipping passing through this part of the reef. The beacon was constructed in 1844, under the order of the British Admiralty by 20 convict stonemasons and labourers.

Stone for the beacon was quarried from the phosphate rock found on the island. Shells were burned to make lime for mortar and ironically, timbers were taken from shipwrecks in the area. The work took four months and was supervised by soldiers from New South Wales. The 14m tall beacon, originally canvas-topped, was never lit.

In 1890–1892, guano (phosphatic rock) mining of historical significance began on the island. The J.T. Arundel Company established a large operation that included constructing tram tracks, huts and a loading jetty. One hundred Chinese and Malay labourers and ten European supervisors were employed. Tens of thousands of tonnes of phosphate were dug and exported. Albert F. Ellis was the manager and the grave near the tower is that of his mother, Annie Eliza, who died on 29 June 1891, aged 52 years. Her last words were recorded as ‘Father! Not my will but thine be done. My-God-of-Love. Reader! Be Ye Also Ready’, a potent reminder of the hardships endured by the island’s inhabitants.

Over the years the beacon has suffered damage from undermining, stone bedding loss, cracking walls from lightning strikes, and natural deterioration due to the harsh weather conditions experienced at Raine Island.

A grant, obtained under the 1988 Australian Bicentennial Project, enabled Scottish stonemason, Iain Watson, and crew to complete conservation and restoration work. This included actual replacement block fabrication on site using the 1844 quarry area, sealing of the parapet top and the construction of an aluminium access ladder leading to a grill floor just below the parapet, (to enable future research observational possibilities). To complete this project, the team lived on the island for two months.

In 1994 another restoration program was undertaken to repair and stabilise the beacon and to safeguard it from lightning strikes. A John Herbert Award for Excellence in Heritage Conservation Works or Action was awarded for the restoration project. The beacon, which includes 900 legible carved or painted inscriptions including Erubam Le, Meriam Le, and Ugarem Le names, is considered one of the most important historical monuments in the Great Barrier Reef World Heritage Area and is listed on the State Heritage Register and the Register of the National Estate.