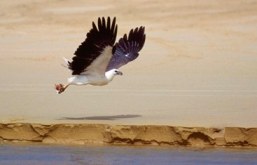 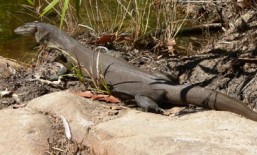 Camping is not allowed on Possession Island National Park.

Camping, resort, lodge and guest house accommodation is available on the mainland in Seisia, 12km south of Possession Island, and Bamaga, 5km further south of Seisia, near the tip of Cape York Peninsula. For more information see the tourism information links.

Boating and fishing is possible in waters around Possession Island National Park.

Be aware that crocodiles can turn up anywhere in croc country, including tidal reaches of rivers, along beaches, on offshore islands and cays in the Great Barrier Reef and Torres Strait, and in freshwater lagoons, rivers, and swamps. Crocodiles are dangerous and attacks can be fatal. Remember to be croc wise in croc country.

Possession Island National Park provides habitat for several species of bats. During the day, bat colonies roost in caves and abandoned mine shafts on the island. At night they leave their roosts to prey on moths and other insects. Some hunt above the low open woodlands and melaleuca swamps while others hunt below the vine forest canopy. Do not enter mine shafts or caves on these islands. They are unstable and may collapse or the vulnerable bats will be disturbed.

A variety of birds can be seen among the islands’ vegetation including olive-backed sunbirds, mistletoebirds, Australasian figbirds, noisy friarbirds, rose-crowned fruit-doves, black-faced cuckoo-shrikes and rainbow lorikeets. On the shore, coastal birds such as whimbrels, eastern reef egrets and beach stone-curlews stalk the shallows while white-bellied sea-eagles and lesser frigatebirds soar overhead.

Reptiles living on the islands include several small skinks and Merten’s water monitors, while mammal sightings include little red flying-foxes and short-beaked echidnas.