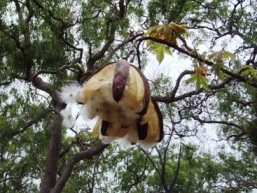 Kapok is one of many plants used traditionally by Aboriginal people. 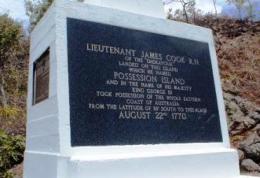 A monument to Lieutenant James Cook stands on the island.

The landscape of Possession Island is a series of rocky hummocks interspersed by low-lying land. Eucalypt woodland with a grassy understorey covers the rocky ground of the lower slopes of the hummocks. There are also diverse species of mangroves near a creek.

Eastern bent-wing bats travel to Possession Island from mainland Cape York Peninsula and as far north as Papua New Guinea, covering up to 100km a night in search of food.

Hoary wattled bats can be identified by the conspicuous white tips to their long, sooty-coloured body fur, giving it a ‘hoary’ or frosted appearance. They can have small lobes of skin or wattles between the ears and mouth. These bats typically fly about at dusk, leaving their roosts before other species have emerged.

Coastal sheathtail bats are small grey-brown bats, with lighter fur underneath, distinguished by the projection of their tail through the upper surface of the tail membrane, and the folding of their wing tips at rest above the remainder of the wing. They share their roosting sites—caves and mine shafts—with the other species of bats. They prey on beetles and other insects, often returning to their roost site after catching food to eat it.

Possession Island National Park—Possession and Eborac islands—are part of the Muralug Archipelago (Prince of Wales Group), a group of continental islands clustered around the tip of Cape York Peninsula.

After Cook had ‘hoisted the colours’ on Possession (Bedanug) Island, he sailed south and west, past other inner islands and recorded: ‘We saw upon all the adjacent lands and islands a great number of smokes—a certain sign that they are inhabited.’ As he sailed closer to Prince of Wales (Muralag) Island, Cook noted a number of people, men and women on the beach. ‘Some of the men had on pretty large breast plates, which he supposed were made of pearl oyster shells’. This is the first recorded European observation of the Kaurareg.

Lieutenant James Cook (1728-1779) set out from England in 1768 on the HM Barque Endeavour under instruction from King George III and with secret instructions to determine the existence of a great southern continent. After circumnavigating New Zealand, Cook decided to ‘steer to the westward until we fall in with the east coast of New Holland and then follow that direction of the coast to the northward’. Land was first sighted on 19 April 1770. Cook then sailed north for 8000 km along the east coast of Australia, through the treacherous waters of the Great Barrier Reef, eventually rounding (and naming) Cape York Peninsula. On Possession Island, on 22 August 1770, Cook ‘hoisted the English colours’ and took possession of the whole eastern coast of Australia. Cook recorded the event in his journal:

‘I now took possession of the whole eastern coast, from latitude 38 deg. to this place, latitude 10deg. 30min., in right of his Majesty King George the Third, by the name of New South Wales, with all the bays, harbours, rivers, and islands situated upon it. We then fired three volleys of small arms, which were answered by the same number from the ship.’

A monument in recognition of this event has been erected on the headland above the beach where Cook raised the flag in 1770.

European contact with the islands began during the nineteenth century with maritime industries. In 1846, John Sweatman, on the Castlereagh, noted the small schooner Ariel anchored and engaged in collecting trepang (beche-de-mer) and tortoiseshell among the islands. By 1880, pearling operations in the area involved four vessels.

Gold was discovered on Possession Island in 1896. Production in the Possession Island Gold and Mineral Field began in 1897. The mines and other workings are located near the north-west coast of the island. The main workings were located on two almost vertical reefs of quartz veins. Mining continued until 1906 when the leases were abandoned. Attempts were made to reopen the workings in 1919, and again in 1934–35, but without success. Between 1897 and 1905, a total of 155.42kg of gold was produced from 7245t of ore (including some returns for the Horn Island Gold and Mineral Field). Today the abandoned workings include several mine shafts and small cuts.