We recognise the traditional custodians of the ancient and expansive landscapes in Central West Queensland, and pay our respects to Elders past, present and emerging. 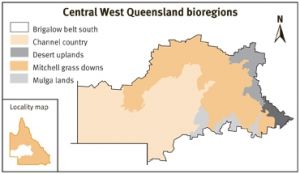 Mighty inland rivers disperse into braided channels, with waterholes and other wetlands. These may be dormant for years before bursting into life with flood waters from hundreds of kilometres away. Floodwaters are slow-flowing and fill floodplains tens of kilometres wide. The Channel Country may be the world’s finest natural watering system.

It supports more than 50 ecosystems, including coolibah woodlands, sand plains and vast dunefields—all adapted to a climate of infrequent local rain and a parching evaporation rate.

When wet, the soils absorb water and expand. When dry, they shrink and crack deeply, making it difficult for trees to establish roots. Unique animals shelter within the cracks, including endangered Julia Creek dunnarts.

Sand plains, deep red loam soils and a drier climate allow mulga trees to dominate, with mosaic patches of grasslands and eucalypt/acacia woodlands. Each mulga tree canopy channels rain to its roots, like an umbrella blown inside out.

Dominated by acacia/eucalypt woodland with spinifex hummock grassland, the uplands are home to specialised fauna.

The Lake Eyre Basin is one of the world’s last largely unregulated wild river systems. Spread across parts of Queensland, South Australia, Northern Territory and a sliver of New South Wales, and covering 1.2 million square kilometres, Lake Eyre Basin contains five major drainage basins, including the two most variable large watercourses in the world—Cooper Creek and the Diamantina River.

Residents—human, plant and animal—depend on flood cycles that transform this dry, harsh land into a teeming mass of life. When the rains come, millions of birds, billions of fish and countless plant species suddenly respond in their quest for survival.

The creation of Lake Eyre

From above, Lake Eyre is shaped like a kangaroo skin with one arm folded under. Stories passed down by Aboriginal groups of central and south-central Simpson Desert tell how the lake was formed in this shape long ago. Many versions describe a kangaroo hunt after which the skin is used to create a lake.

Traditional stories explain the natural world and contain many messages for the careful listener. The details of the Lake Eyre creation stories vary, but the lesson remains the same—make good use of what you have.

Together the stories build an oral map of the landscape, pointing out routes and landmarks for travellers who know how to follow them.

A well-informed visitor with sharp eyes may spot many mammals besides red and grey kangaroos. Eight macropod species are found in the district. Most parks have at least three macropod species, with seven living at Idalia, including vulnerable yellow-footed rock-wallabies.

You are likely to see dingoes at Diamantina and Munga-Thirri (formerly known as Simpson Desert National Park), and marsupial mice occupy most of the district.

Specialists are restricted to specific habitats, like Hall’s babblers in Idalia, Lochern and Welford’s mulga woodlands and spectacular spotted harriers, a raptor of the grassy plains. Nomadic budgerigars are regularly on the move, chasing their diet of grass seeds.

Paradoxically, this arid land caters for thousands of water birds. In wet times breeding colonies of pelicans, ibis, egrets, herons and spoonbills are among the largest in Australia.

Birdwatch is most rewarding at Surprise Creek and in the spinifex grassland at Bladensburg; Hunters Gorge and Lake Constance at Diamantina; Broadwater Waterhole at Lochern; Sawyers Creek and Little Boomerang Waterhole at Welford; and along Idalia and Combo’s creeks and waterholes.

Along the Simpson Desert QAA track in Munga-Thirri, catch a glimpse of shy Eyrean grasswrens, whose furtiveness frustrates photographers.

Look for yellow-spotted monitors at Bladensburg, Diamantina, Idalia and Lochern, and spiny knob-tailed geckos at Bladensburg. Mulga snakes are most notable at Lochern and Idalia.

Over a dozen fish species are found here, and many, like Cooper Creek catfish in the Thomson River at Lochern, are not found outside the Cooper catchment.

Species lists are available from the Queensland Government's request a species list page.

Visitors to this region are invited to contemplate the migration of people across this land, and their ingenuity fostered by isolation and climatic extremes.

First Nations people thrived on the secret bounty of these arid and semi-arid lands, trading along rivers and finding food in unlikely places. Each group encountered non-indigenous people who changed their lives forever. Today, connection to and caring for country remains strong—alive in the language, landscape, stories, artefacts and traditions continued by descendants.

Explorers like Burke and Wills sought their fortunes, as did miners and pastoralists from Europe and Asia. Many died, some barely survived but others thrived. Now, pastoral properties, some covering more than 10,000km2, mines, small towns, parks and reserves dot outback Queensland’s landscape.