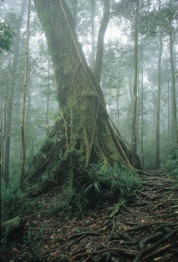 Mists are common in the rainforest. 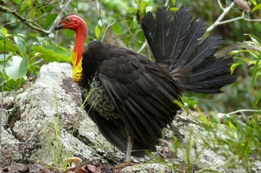 Australian brush-turkeys roam throughout the park.

Approximately 74 per cent of Paluma Range National Park is within the Wet Tropics World Heritage Area (WTWHA). Proclaimed in 1988, the WTWHA extends for about 450km between Cooktown and Townsville. Consisting of nearly 900,000ha, vegetation is primarily tropical rainforest, but also includes open eucalypt forest, wetlands and mangrove forests. The WTWHA meets all four natural criteria for World Heritage listing. These criteria recognise the area's exceptional natural beauty and the importance of its biological diversity and evolutionary history, including habitats for numerous threatened species. The WTWHA also has cultural significance for Aboriginal people who have traditional links with the area and its surrounds.

The deeply-dissected escarpment of the Paluma Range is a maze of streams and cascades. Patches of different shades of green reflect the various forest types which have developed under the influence of aspect, altitude, climate and soil. The green of the rainforest is punctuated with delicate, pink hues of young, developing leaves. The closed canopy, buttressed trees and deep layer of leaf litter provide suitable habitats for rainforest animals such as the green ringtail possum Pseudochirops archeri, northern barred frog Mixophes schevilli and white-tailed rat Uromys caudimaculatus.

About half way up the range, at Little Crystal Creek, where eucalypt forest merges into rainforest, hoop pines Araucaria cunninghamii can be seen lining the creek on the rainforest margin.

Birds found only in the wet tropics, the chowchilla Orthonyx spaldingii, mountain thornbill Acanthiza katherina and golden bowerbird Amblyornis newtonianus, can be seen at Mount Spec along with more widespread and commonly seen species such as the Australian brush-turkeys Alectura lathami and Lewin's honeyeater Meliphaga lewinii.

Visitors may be fortunate enough to find bowers—display areas of male bowerbirds. The golden bowerbird Amblyornis newtonianus, builds a tall lattice structure decorated with flowers and lichen. The tooth-billed bowerbird Scenopoeetes dentirostris, by contrast, simply clears a patch of forest floor for his court and lays down freshly cut leaves.

Paluma Range and the township of Paluma are named after a Queensland colonial government survey ship that worked along the North Queensland coast in the 1880s and 1890s—the HMS Paluma.

The township of Paluma—once known as Cloudy Clearing—developed after tin was discovered in the area in 1875. Tin mining peaked in 1905 but soon declined due to poor access, high transport costs and low tin prices. Remnants of the era can be seen on both the Paluma rainforest walk and the H track.

McClellands lookout commemorates the overseer who, as part of an employment scheme during the depression of the 1930s, built Paluma Road and the bridge across Little Crystal Creek. The stone bridge is an enduring tribute to the stone masonry of those times.

Rich in cabinet timbers, part of what is now Paluma Range National Park was logged during the early 1930s to mid 1970s. Hardwoods and softwoods were taken from the rainforest and surrounding eucalypt forests. Most timber harvesting stopped with the formation of the Wet Tropics World Heritage Area in 1988.

At nearly 1000m and with its excellent views of Halifax Bay, the township of Paluma was chosen by the United States Army as a radar station in World War II. The antennae for the radar was located near McClellands lookout. The radar station detected enemy planes in July 1942, successfully warning Townsville of the approaching air raid. In 1943 the Royal Australian Air Force took control of the operation of the radar station before it closed in early 1945.