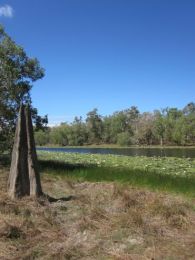 In the Langi and Coen River sections of the park, dense rainforest cloaks the slopes of the McIlwraith Range in the east and, in the west, deciduous vine thickets extend along the rivers. These 'fingers' of forest are important wildlife corridors. The wide-spreading and multi-channelled Coen River is flanked with deciduous vine thickets and monsoon scrubs. By contrast, the Archer River has a deep, single channel fringed with open stands of paperbarks and dense rainforest. The area between the rivers is covered in open eucalypt woodland interspersed with melaleuca swamps and lagoons fed by the overflow of rivers during the wetter months. Well into the dryer months these swamps are fringed with paperbarks and the red-flowering, freshwater mangrove Barringtonia acutangula and produce eye-catching displays of waterlilies.

The Archer Bend section of the park is alluvial river flats with open savanna woodland. At Archer Bend, in the south-western extremity of the park, the river flat is 8 km wide and contains many vegetation types ranging from tall gallery forests to 'thorn scrubs' and eucalypt and melaleuca woodlands.

Many species of birds live in the park—the rose-crowned fruit-dove, sacred kingfisher and sulphur-crested cockatoo may be seen in vine thickets and riverine forests. The palm cockatoo, a significant totem animal for many local Aboriginal people, frequents the banks of watercourses, perched high in the canopy. The Australian bustard, also known as the plains turkey, may be seen searching for food in the cool of the late afternoon.

The spotted cuscus—a small possum-like animal—is found in the rainforest margins along watercourses. Antilopine wallaroos and small agile wallabies are also present in the park.

Wik Mungkan, Southern Kaanju and Ayapathu Aboriginal peoples have lived in the area for thousands of years. They shared spiritual beliefs about how the landscape was created, and rights and responsibilities for occupying, using and caring for the land and its resources. The landscape is a mosaic of traditional story-places, ceremonial sites and features with Aboriginal names. They hunted and gathered the plentiful resources available to them. Rivers and swamps provided roots and waterlilies as well as fish, ducks and waterbirds, while wallabies and small game abounded on the grasslands. Local Aboriginal people also have a strong connection to the park through their significant involvement in, and contribution to, the Cape York Peninsula cattle industry.

The first Europeans in the area were explorers. In 1848, members of Edmund Kennedy's ill-fated Cape York expedition almost certainly met Ayapathu people. In late 1864, the Jardine brothers drove cattle through the lower Archer River area, noting its potential for pastoralism, on their way to the tip of Cape York Peninsula.

Gold rushes on the Palmer River in the 1870s brought tens of thousands of European and Chinese people to the region. It wasn't until 1887 however—when gold was discovered near present-day Coen—that mining began to impact upon the local Aboriginal people.

During the 1880s, the overland telegraph line from Laura to the tip of Cape York Peninsula was constructed to provide communication between southern centres and remote northern outposts. Along with the discovery of gold, the telegraph brought greater contact between Aboriginal, European and Asian peoples.

Following in the wake of the telegraph line, European settlers began taking up land for cattle grazing. Conflict erupted between the new pastoralists and local Aboriginal people who were forced from their lands and hunting grounds. The Massey brothers leased Rokeby Station in 1884. Over the years, a relationship of mutual respect developed between the Rokeby cattlemen and Aboriginal people, who were the mainstay of the industry. By the 1930s, a large number of Aboriginal people were associated with the station—stockmen and their families, together with older people—lived in large camps near the homestead and permanent mustering camps. Work on the cattle station allowed Aboriginal people to continue aspects of traditional life on their lands and avoided the impact of a 1890s government policy which would have seen their removal to missions or the 'fringe camp' in Coen. The introduction of equal wages for Aboriginal pastoral workers in the 1970s meant that station work disappeared for many Aboriginal people. Today, remains of stockyards, dams, fences and tracks, related to a long history of cattle grazing, can be seen around the Rokeby homestead area. These remnants are an important historical and cultural link to the early days of the cattle industry and remain highly significant to both Aboriginal and non-Aboriginal people of the area.

Since 1884, parts of what is now the Archer Bend section of the park, had been alternately leased for grazing and then left as vacant Crown land. The lands south of the Archer River were taken up in 1952 as the Archer River Pastoral Holding.

In 1977, most of the Archer River Pastoral Holding was gazetted as Archer Bend National Park. Rokeby Station was purchased by the government in 1981 and declared a national park in 1983, to ensure the conservation of the pristine Archer River floodplain. The two areas were amalgamated to become Mungkan Kandju (Kaanju) National Park in 1994, under the names of two of the Aboriginal Traditional Owner groups for this country—Mungkan (on the western side) and Kandju (to the east).

In the early to mid 1970’s, the late Wik Mungkan Elder, John Koowarta, attempted to purchase the Archer River Pastoral Holding, but the purchase was blocked by the then Queensland Government. His case was subsequently considered by the Supreme Court and the Human Rights Commission during the mid 1970’s and 1980’s. The end result found in favour of Mr Koowarta, but by this time, the pastoral holding had already been gazetted as the Archer Bend National Park, therefore denying the Wik Mungkan people the opportunity to purchase it.

In 2010, 75,074 ha of land was revoked from the Archer Bend section of Mungkan Kandju National Park to return it to the Traditional Owners. The revocation and subsequent freehold grant (in 2012) of this land to the Oyala Thumotang Land Trust amended the 1977 national park decision. The trust has dedicated over 32,200 ha of this land as the Yuukingga Nature Refuge, conserving the area’s important natural and cultural resources.

In May 2012 the Queensland Government transferred ownership of Mungkan Kandju National Park to the Traditional Owners, the Wik Mungkan, Ayapathu and Southern Kaanju people. At the formal ceremony the park was renamed as Oyala Thumotang National Park (CYPAL) and the Premier of Queensland personally apologised to those who suffered as a consequence of the previous tenure dealings of the land.

The name Oyala Thumotang is derived from the languages spoken by Ayapathu, Southern Kaanju and Wik Mungkan people, and loosely translates to ‘people of the river lands’. The park is now jointly managed by the Oyala Thumotang Land Trust and the Queensland Government in accordance with an Indigenous Management Agreement and other land management arrangements.