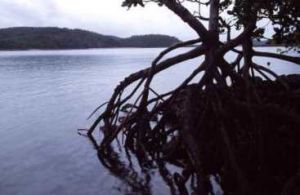 Newry Islands National Park is part of the Great Barrier Reef World Heritage Area. Rocky outcrops and sandstone cliffs are features of these hilly continental islands. Eucalypt woodland covers most of the island but patches of lush rainforest grow in sheltered gullies and headlands are cloaked with hoop pines. Brushtail possums, fawn-footed melomys and northern brown bandicoots are among a diverse assortment of animals that inhabit Newry’s forests and grasslands.

Surrounding the island, marine habitats such as mangroves, fringing reef and seagrass beds, provide food and shelter to animals including dolphins, dugongs, turtles and estuarine crocodiles.

Aboriginal people have long had an association with the Newry Islands. The area has provided for hunting and fishing for many thousands of years. They paddled canoes from the mainland and Whitsunday Islands, their movements and whereabouts governed by the availability of food.

Coconuts and pineapples were grown on Newry Island and a licensed dugong fishery produced oil for medicinal purposes.

Parts of the islands became national parks in 1938, while the Newry Island resort operated from the early 1920s until 2001. Remnants of the area’s resort past can be explored by a self-guided walk along the resort trail.