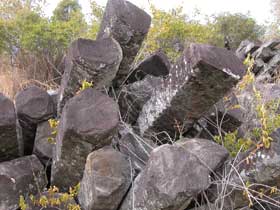 Mount Scoria is an obvious and impressive landmark, although not large compared with most mountains. It rises 150m above a flat, lightly vegetated plain and has a base less than 2km in circumference. Mount Scoria was the site of an active volcano about 20 to 26 million years ago.

The mountain features unusual and impressive basalt columns. As the volcano's lava cooled, it formed distinct columns or pillars with five to eight sides, called columnar basalt. The number of sides indicates the speed and evenness of cooling. The six-sided columns formed from a slow and regular cooling process while the five, seven and eight-sided columns were formed by irregular shrinkage caused from a quick and uneven cooling process.

The columns are best viewed from the walking track. Please do not strike them as this can cause significant damage.

The mountain's name is derived from scoriaceous basalt, or scoria, which is slightly misleading as very little scoria is found here. The mountain is mostly vesicular basalt, a porous rock with tiny holes left from gases trapped in the magma. The small amount of scoria here suggests Mount Scoria's volcanic formation was a slow lava flow rather than a fiery explosive eruption.

The vegetation around the eastern and southern slopes of Mount Scoria is a good example of an open type of semi-evergreen vine thicket. The open structure of the thicket is unusual in Central East Queensland and most closely resembles deciduous vine thickets occurring further north.