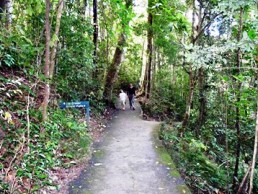 Staghorns in the Mount Hypipamee forest. 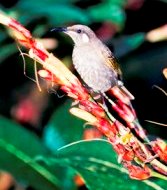 Several different forest types are found in Mount Hypipamee National Park. As climatic conditions at this higher altitude are wet and cool, the rainforest plant species around the car park and along the crater track are the same as, or closely related to, plants typically found in the sub-tropical rainforests of southern Queensland and New South Wales. The composition of this rainforest is also affected by soil type. On rich, red basaltic soils, near the bridge, the forest is particularly diverse. Where the track splits to Dinner Falls, the soils are derived from granite, resulting in plants with more uniform trunk sizes and smaller leaves. Towards the crater, the forest opens up and the nearby ridge is dominated by wet sclerophyll forest—an ecotonal forest between rainforest and the dry open woodland of the drier country to the west.

Mount Hypipamee is a good place for birdwatching, particularly for upland rainforest birds, some of which are endemic to the Wet Tropics. Australian brush-turkeys Alectura lathami as well as Lewin's Meliphaga lewinii and bridled Lichenostomus frenatus honeyeaters are common around the picnic area. In spring and early summer, visitors may spot the male Victoria's riflebird Ptiloris victoriae—one of Australia's birds of paradise—displaying from an exposed perch. Golden bowerbirds Amblyornis newtonianus, spotted catbirds Ailuroedus melanotis and tooth-billed bowerbirds Scenopoeetes dentirostris are also seen here.

The deep crater, or volcanic pipe, at the centre of the park is thought to have been created by a massive gas explosion. Gas rose suddenly through a crack towards the earth's surface and expanded as the surrounding pressure reduced (similar to a scuba diver's bubbles becoming bigger as they rise to the water surface). A massive explosion erupted as the gas burst through to the surface, creating a deep cylindrical hole, or pipe, through the granite. The explosion hurled boulders and rocks into the air, but little volcanic material was produced. Known as a diatreme, this is the only example of this feature in North Queensland.

Mount Hypipamee National Park is within the Wet Tropics World Heritage Area (WTWHA). Proclaimed in 1988, the WTWHA extends for about 450 km between Cooktown and Townsville. Consisting of nearly 900,000 ha, vegetation includes tropical rainforest, open eucalypt forest, wetlands and mangrove forests. The WTWHA meets all four natural criteria for World Heritage listing. These criteria recognise the area's exceptional natural beauty and the importance of its biological diversity and evolutionary history, including habitats for numerous threatened species. The WTWHA also has cultural significance for Aboriginal people who have traditional links with the area and its surrounds.