Offset project for the ground parrot

Find out more about the proposed works to restore habitat for the ground parrot in Mt Coolum National Park. 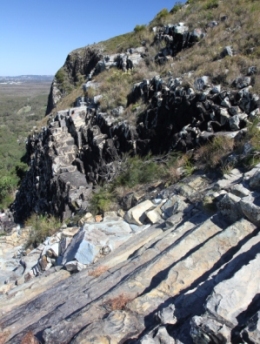 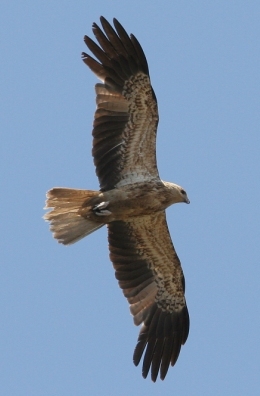 From Mount Coolum's summit whistling kites and other birds of prey may be seen soaring on the wind currents. 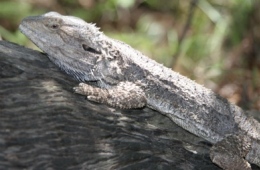 A variety of lizards and snakes live in the park. 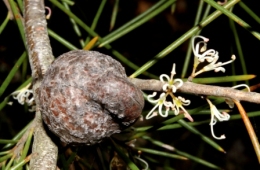 Hakea Hakea actites have needle like leaves and thick seed pods that protect its seeds during bushfires.

Mount Coolum was created around 26 million years ago and is one of several isolated volcanic peaks found on the Sunshine Coast, the other most prominent ones being the Glass House Mountains.

Large hexagonal cooling columns are prominent in the rock around the margin of the dome. These can be clearly seen on the Summit walk that passes over what appear to be large rock steps—cooling columns that are nearly horizontal or have low outward dips.

Over time several incised gullies have formed ephemeral waterfalls on the summit. During rain periods these gullies become attractive waterfalls, which are clearly visible from surrounding areas.

The Marcoola lowland sections of the national park contain acid sulphate-potential soils. These soils contain iron sulphides that produce sulphuric acid and often release toxic quantities of iron, aluminium and heavy metals when disturbed and exposed to air. This can acidify poorly-buffered soils, including those dominated by sand, and can restrict growth and kill intolerant native plants and animals. It is extremely important to avoid soil disturbance in these areas.

For an in-depth look at geology in national parks in this region obtain a copy of Rocks and Landscapes of the National Parks of Southern Queensland by Warwick Willmott.

The cliffs of the Mount Coolum section provide habitat for a pair of nesting peregrine falcons Falco peregrinus. This pair of falcons is one of 25–35 known pairs in south-east Queensland.

The Marcoola lowland areas provide critical habitat for many threatened species and protects remnants of coastal lowland areas that have been largely impacted by clearing for urban development. The Marcoola section provides essential habitat for wallum frogs, including the vulnerable wallum froglet Crinia tinnula, wallum sedgefrog Litoria olongburensis and wallum rocketfrog Litoria freycineti. These frogs are specialised for living in nutrient poor, acidic swampland soils and are particularly susceptible to changes in water chemistry and the effects of habitat loss and fragmentation due to urban development.

A small population of ground parrots Pezoporus wallicus wallicus lives here and in the adjacent Maroochy Airport heathland. Before extensive settlement they occurred in Queensland from the northern suburbs of Brisbane north to Hervey Bay.

The Coolum Creek and Lower Maroochy River wetland areas are recognised as a nationally-significant wetland system. These wetlands provide critical habitat for many species of bird, including 45 migratory species protected under international treaties.

Seven plant species of conservation significance occur in the park.

The near-threatened Mt Coolum bertya Bertya sharpeana also grows here. This is a bushy shrub or small tree that grows to 4m, with distinctive short oval leaves that have curled margins and furry surfaces.

An undescribed sedge, genus Lepidosperma, is found on the western, northern and eastern slopes of Mount Coolum—currently the only known record of this species. Lepidosperma quadrangulatum is also found here and in Noosa National Park’s Emu Mountain section. These populations are of disjunct distribution with the next closest populations found in northern New South Wales.

Other species of conservation significance are the vulnerable Leptospermum oreophilum, endangered swamp stringybark Eucalyptus conglomerata and the near-threatened Durringtonia paludosa.