The science behind the zoning plan 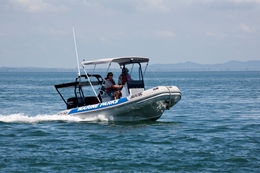 Rangers on patrol in Moreton Bay.

Developing an effective marine park zoning plan is a complex process that relies on extensive research, information and data. This page gives an overview of the science behind Moreton Bay Marine Park's zoning plan review, and outlines some of the key principles that were used to gather and assess all the information required.

The department established the expert advisory panel in February 2007, at the start of the review process. The Panel comprised experts across fields including marine reserve design, fisheries science, environmental economics and social science. Their role was to provide the department with expert advice and to ensure the scientific integrity of the review. This included:

The Panel also provided advice on the adequacy of existing protected areas in the marine park and oversaw the integrity of the scientific methods used in the review.

Research from around the world show that an effective marine park is one that:

The department used the 13 Scientific Guiding Principles to assess each area in the marine park. Two of the key guiding principles for this review were:

2) The habitat model: making sure all the habitats are represented

The habitat map was the basis for all zoning decisions. It was used to make sure the zoning met the Scientific Guiding Principles; most importantly, of having each habitat type represented in a 'no take' area.

This is the most comprehensive habitat map of the Moreton Bay's habitats currently available. It was developed using existing research, reports and data, as well as information from a study of the offshore areas commissioned by the department specifically for the review.

In addition to data such as, for example, recreational and commercial fishing records, the department also established a Stakeholder Reference Group of more than 30 key stakeholder representatives, and conducted an online survey to gather more information about how the marine park is used, which areas are most popular and what marine park users like/dislike about individual areas. This information was combined to develop a list of candidate areas, which was then refined to develop the draft zoning plan which was released for wide public consultation in December 2007.

The analysis method diagram (PDF, 69.3KB) shows how all this information was considered to develop the draft zoning plan, which was released for public consultation in December 2007.