In Australia the territorial sea baseline is a line from which maritime limits, including coastal waters, are calculated. The baseline may be represented by following the low water mark or by following gazetted 'straight' lines—which are straight baselines, river closing lines and bay closing lines. The co-ordinates that define these straight baselines were recently comprehensively reviewed in consultation with state/territory mapping and legal agencies. They were subsequently re-gazetted in February 2006 under the Seas and Submerged Lands Act 1973. Refer to Seas and Submerged Lands (Territorial Sea Baseline) Proclamation 2006 for a full list of these co-ordinates.

In the region of Moreton Bay Marine Park, the territorial sea baseline consists of a number of gazetted straight lines because of the fringe of islands and emergent features (e.g. Flat Rock) in the vicinity of the coastline.

In particular, the baseline does not follow the low water mark on the eastern side of Moreton Island, but follows a gazetted straight line that extends from Cape Moreton to Flat Rock (refer to Figure 1). As a result the coastal waters offshore from Moreton Island extend to almost nine nautical miles from the shore at the widest part. 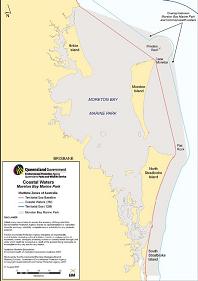 Flinders Reef is another feature that forms part of the baseline because of its proximity to Moreton Island and because the top of the reef is exposed at low tide. Its inclusion in the territorial sea baseline means that Queensland Coastal Waters extend in a three nautical mile radius from the north-western to the south-eastern side of the reef (Figure 1).