Boat strike impact on turtle and dugong in Moreton Bay Moreton Bay Marine Park is one of Queensland’s most important natural, recreational, cultural and economic resources. With south-east Queensland growing faster than any other region in Australia, the popularity of the marine park for boating and fishing is rapidly increasing.

Moreton Bay Marine Park, which was declared in 1993, stretches along 125 km of coastline from Caloundra to the Gold Coast and is managed by the department. The marine park aims to maintain a balance between the needs of the bay and those who use it, now and for the future.

Six of the seven species of sea turtle in the world are found in Moreton Bay. The green and loggerhead turtle are the most common and are permanent residents. Moreton Bay is significant habitat for loggerhead turtles and has the most important population of the species along the east coast of Australia. Populations of the species, which is listed as ’endangered to extinction’ have declined by at least half since the mid 1970s. Each year around 200 reports of sick, injured and dead turtles in Moreton Bay are received by the department.

Dugong are the only plant-eating mammal that live their entire life in the marine environment. When fully grown they are about 3 m long and can weigh up to 400 kg. These animals are extremely slow to reproduce. Females are 10 to 17 years old before they begin breeding. They have only one calf every three to five years, so adult survival must be high for the population to be sustained. The 600 to 800 dugong that live in Moreton Bay are geographically isolated, 200 km away from the closest population in Hervey Bay. Moreton Bay is also the most southern limit they are found in Australia. Moreton Bay’s dugongs are commonly found in large herds of about 100 animals. Turtle and dugong are surface-breathing marine animals and are often injured or killed by speeding vessels when coming up for air. Moreton Bay is a hot spot for boat strikes—half of the incidents recorded along the Queensland coast occur in Moreton Bay.

In the marine park, there are two types of turtle and dugong go slow areas. One requires all vessels, including jet skis, to be operated off-the-plane or in displacement mode, prohibits motorised water sports and is located in five areas of the bay (see Go slow map (PDF, 793.2KB) ). The other type is specific to southern Moreton Bay and affects vessels larger than 8 m, which are restricted to a maximum speed of 10 knots (see Go slow map (PDF, 793.2KB) ).

This is an endangered loggerhead turtle. It was first caught and tagged (T51071) by departmental turtle researchers on the Moreton Banks, north of Fisherman’s Gutter in September 1990. The young male is thought to have only recently arrived to live in the bay. He is likely to have hatched from a nest somewhere on a beach in the southern Great Barrier Reef and spent several years in the waters of the Pacific Ocean before making Moreton Bay his home.

The turtle pictured above, has been recaptured seven times in the same area, including once in Brown’s Gutter. In May 2004, he had matured to adulthood and was preparing for his first breeding season.

The department recaptured T51071 in 2006, again on the Moreton Banks in the same general area as previous capture sites. He was found with the horrendous injury, as seen in the above photo, from being hit by an outboard powered boat travelling at speed and suffered a severely fractured carapace and two propeller cuts. He survived as there were no spinal or internal injuries.

Despite ongoing efforts by the departmental rangers, many Moreton Bay users continue to operate their vessels at planing speeds in Turtle and Dugong Go Slow Areas. These areas are there to stop boats striking marine animals in important shallow feeding and resting areas.

Other threats to turtles in Moreton Bay are fishing equipment and litter. Fishing tackle, fishing line, crab pots, ropes and plastic rubbish result in injuries or turtle deaths from infection, amputation, choking and drowning. Entanglement in crab pots is increasingly becoming a problem as abandoned pots and loose ropes account for around 20 reported turtle deaths each year. 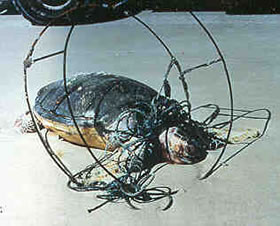 Help the turtles and dugong in Moreton Bay

Here are a few simple things to do to help turtle and dugong in Moreton Bay: