Moorrinya National Park’s vegetation is dominated by grassland plains and eucalypt and acacia woodlands, and represents a substantial area of these habitats protected in the Desert Uplands bioregion. More than 400 plant species have been identified in the park including the near threatened (rare) blue grass Dichanthium setosum.

Animals of conservation significance include square-tailed kite Lophoictinia isura, black-chinned honeyeater Melithreptus gularis and grey falcon Falco hypoleucos, all of which are classified as near threatened (rare); painted honeyeater Grantiella picta and squatter pigeon (southern subspecies) Geophaps scripta scripta, which are classified as vulnerable; and Julia Creek dunnart Sminthopsis douglasi, which are endangered. The survival of these animals is reliant on the protection of their habitat and corridor areas outside of the park, especially during dry periods. 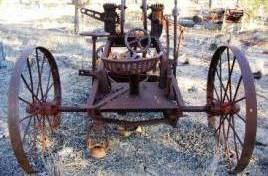 Before becoming a national park, Moorrinya was Shirley Station, and the homestead in the park continues to bear this name. Initially a sheep station, cattle replaced the sheep in the 1970s and continued until the national park was declared in 1993.

Shirley Homestead, the shearing shed and associated outbuildings have been restored and Bell’s outstation, machinery and yards remain as heritage ruins. Old rubbish dumps have been removed.

Outstations, dams, windmills, tanks, horse yards and steam machinery were strategically located to support the station, and much of this infrastructure, dating back to the late 1940s, remains in place today.