The success of nesting and hatchling turtles at Mon Repos is critical for the survival of loggerhead turtles. Photo credit: Robert Ashdown © Queensland Government

Be inspired: Turtles, history and a whole lot more: Mon Repos has plenty to offer!

Mon Repos is all about turtles, right? Yes and no. It is home to some of the most amazing turtle experiences on offer, but it also boasts great ‘beachy’ outdoor fun with a dash of intriguing history thrown in. Photo credit: © Queensland Government 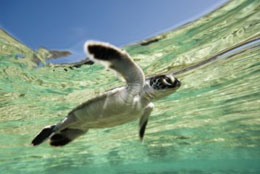 Marine turtles are in trouble—they need our help to survive.

Marine turtles appear to reproduce abundantly as female turtles can lay hundreds of eggs over one nesting season. But turtles grow slowly, they take decades to reach sexual maturity and have on average a 4 year break between breeding seasons. Hatchlings have a low chance of survival with only about 1 in 1000 reaching maturity.

All these factors make turtles vulnerable to human disturbance. If not enough hatchlings from a nesting area survive to maturity it places the breeding population in jeopardy. Artificial lights interfere with turtle’s natural habits and instincts. You can make a difference by cutting the glow of lights affecting beaches in your local area. 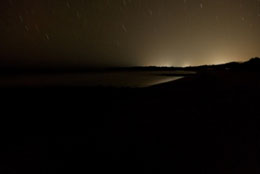 Glow of lights from a coastal community.

The majority of both nesting and hatching turtle activity occurs at night—disturbances and danger from predators, both on land and at sea, is lowest under the cover of darkness. This makes turtles vulnerable to disturbance and disorientation from artificial lights.

Artificial light disturbance can be from a single light directly opposite a nesting beach or from the collective glow of lights from a coastal community.

Female turtles migrate back to the general area of their birth to nest. Turtles choose their nesting beach while still offshore, before coming on land to lay their eggs—usually remaining loyal to that selected beach every nesting year.

Bright lights and the glow from coastal communities may make turtles search for a darker beach. This can be a problem as not all beaches are created equal! Some beaches are open to the elements with erosion affecting nests, some are not good incubators for turtle eggs, while others are rockier, making it harder for turtles to dig their nest—causing them to waste valuable energy with each attempt. Turtle hatchlings make the journey from the beach to the sea.

At night, hatchlings find their way from their nest to the sea by moving towards the lightest horizon they see. Under natural conditions, this is over the ocean and hatchlings will quickly travel down the beach to the water.

On nesting beaches near towns, resorts and camping areas, artificial lights can affect a turtle’s ability to see the natural horizon. Hatchlings become disoriented, veering from their natural path and heading toward the artificial light. Even hatchlings that have made it to the sea can be lured back to the land by strong, coastal lights.

As dawn approaches, the contrast between artificial and natural light decreases and hatchlings who have been attracted inland do not know where to go. Many will not make it—becoming trapped in vegetation or exhausted from wasting energy during their wanderings. Hatchlings caught on shore may overheat and die, or become the next meal of a hungry bird.

You can make a difference!

Turtles need dark beaches! They can’t change their behaviour towards light so it’s up to us to help maximise nesting success and hatchling survival.

During the breeding season (15 October to 30 April) whether you are a resident, visitor or business, you can help cut the glow of lights affecting beaches in your local area.