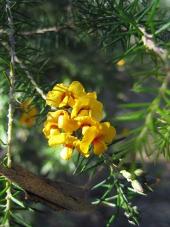 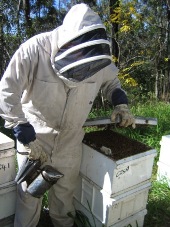 An apiarist collecting honey from one of the beekeeping sites in Moggill Conservation Park.

Winter and spring feature a colourful and fragrant patchwork of wildflowers. Admire the abundant yellow flowers that decorate the vulnerable brush sophora Sophora fraseri and common heathy parrot pea Dillwynia sieberi. Growing in an isolated patch outside its normal range, Dillwynia sieberi can be seen in the south-east corner of the park.

The nectar and pollen of the delicate violet-purple flowers of Hovea lorata also attract many native bees, butterflies and birds.

Weeds and feral animals are a serious threat to the fragile ecosystems of this park.

Pest plants compete with native plants for nutrients and reduce the effectiveness of planned-burn regimes, increasing the risk of wildfire. Some species, such as madeira vine Anredera cordifolia, cat’s claw creeper Macfadyena unguis-cati and mother-of-millions Bryophyllum spp., are dumped illegally as garden waste. Chinese elm Celtis sinensis, ochna Ochna serrulata and creeping lantana Lantana montevidensis are brought in as seed by birds and other wildlife.

Since 1941, commercial beekeeping has been undertaken in the park. Designated apiarist sites allow bees to access valuable nectar from a rich variety of native flowers, including spotted gum, grey ironbark, narrow-leafed ironbark and blue gum.

‘Use of surrounding private country is extremely limited due to small holdings. This makes Moggill Conservation Park an extremely valuable part of our commercial operation.’

The Queensland Parks and Wildlife Service values the custodial role apiarists play in protecting the park.

The land in and surrounding Moggill Conservation Park has sustained life for thousands of years. The origin of the name ‘Moggill’ is believed to be from the Aboriginal word 'Maggil', from the Turrbal language, meaning ‘large water lizard’.

The park contains remnants of a pre-World War II camp. Men were employed to carry out roadwork and clear lantana in the park, taking refuge at night on the edge of the forest in temporary huts and tents. A lone mango tree and some remains of the burnt foundations is all that remains to mark the spot.

During the 1930s, the Bow family joined Moggill’s growing hardwood timber industry. Bullocks were herded to the park and left overnight with bells around their necks to help men find them in the morning. Ironbark, tallowwood, spotted gum and yellow stringybark trees were felled using hand-held cross-cut saws and axes and transported to the Watson and Bow Mill in Kenmore, now the site of the Kenmore Tavern.