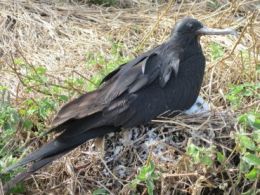 Mitirinchi Island National Park (CYPAL) is a small, rugged continental island rising steeply from a rocky shoreline. The main body of the island is a rocky granite ridge reaching 20 m in height. Small sheltered beaches occur on the eastern and western sides of the island and it is surrounded by a narrow fringing reef.

Plants on the island are low and wind shorn, and consist mainly of grasses, herbs and a dense stand of Pisonia grandis. Bare granite outcrops protrude from the vegetation and the whole island is heavily stained with bird guano.

Mitirinchi Island is recognised as an important seabird breeding site for the black noddy Anous minutus, great frigatebird Fregata minor and lesser frigatebird Fregata ariel. The island is one of only three breeding sites for great frigatebirds in the northern Great Barrier Reef. Both the great and lesser frigatebirds nest only once every two years due to the time it takes for their young to gain independence. Frigatebirds are at the top of the food chain and feed at sea, swooping on their prey without landing in the water. They are highly adapted to life in the air—they are unable to swim and look clumsy on land. However, they can glide and hover on wind currents for hours on end.

The vulnerable green turtle Chelonia mydas and hawksbill turtle Eretmochelys imbricate may be seen in the waters surrounding the island. 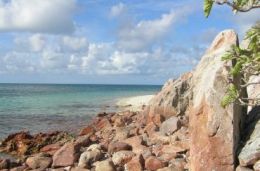 Mitirinchi Island, an area of significance for the Kuuku Ya'u people.

In 2011, the park was transferred as Aboriginal freehold land to the Northern Kuuku Ya’u Kanthanampu Aboriginal Corporation RNTBC Land Trust. The Mitirinchi Island National Park (CYPAL) was then dedicated over the land.

The Land Trust manages the park jointly with the Queensland Government in accordance with an Indigenous Management Agreement.