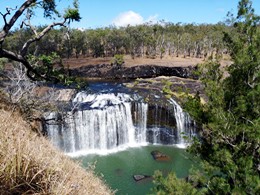 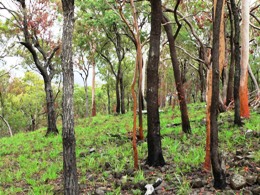 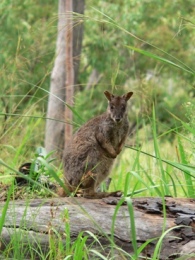 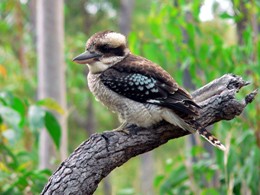 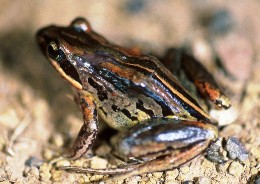 Millstream Falls National Park has an interesting geological history. The ancestral Millstream valley was created more than three million years ago, when 300 million year old rocks (rhyolites and granites) were eroded. This formed an ancient landscape of rugged hills and deep valleys. About 3–1.2 million years ago, Windy Hill near Ravenshoe, where the wind turbines now stand, was created by a volcano. Periodic eruptions poured three lava flows into the rivers, partly filling the Millstream and other ancient valleys. At Big Millstream Falls, the oldest of these flows is at the base of the falls. The youngest flow, 1.24 million years old, forms the car park area and upper slopes of the valley. The middle flow weathered to form a thick soil. This indicates that some time passed between its eruption and the most recent lava flow. As each lava flow cooled, contraction formed vertical cracks and produced the cooling columns that can be seen in the cliffs and rock surfaces above the falls. For 1.2 million years, erosion by the river has cut through the sequence of lava flows, exposing the individual flows and cooling columns. Weathering of the original, black basalt rock has created the rich, red agricultural soils in the Ravenshoe area. At Little Millstream Falls, the stream has cut down through the basalts that form the car park and upper parts of the gorge and, at the falls themselves, the water flows over rhyolite.

Mammals found in the Millstream area are mostly typical of those found in similar forest types. Stripe-faced dunnarts Sminthopsis macroura, feathertail gliders Acrobates pygmaeus, sugar gliders Petaurus breviceps, greater gliders Petauroides volans, common brushtail possums Trichosurus vulpecula, common ringtail possums Pseudocheirus peregrinus, whiptail wallabies Macropus parryi and common wallaroos M. robustus and Mareeba rock wallabies (Petrogale mareeba) have all been recorded within the park. There are also records of platypus Ornithorhynchus anatinus in the Millstream River at various locations. The distribution of the northern quoll Dasyurus hallucatus once extended to this area but there have been no confirmed sightings for some time.

In 1942, the Commander-in-Chief of the Australian Military Forces, General Sir Thomas Blamey, investigated using the Atherton and Evelyn tablelands as a base for rehabilitating and training troops. The area was close to the battlefields of New Guinea and the climate would give the troops respite from the tropical heat of the coast and assist in the convalescence of sick and wounded soldiers. The tablelands also provided a training area similar to that of the South East Asian environment. During 1943, troops began arriving at bases established across the tablelands.

Approximately 320 army and ancillary units were based on the tablelands across 160 sites. Today, the remains of sites found in Millstream Falls National Park are the most complete. Camp sites, walking tracks, water drains, concrete slabs, trenches, training areas, corduroy roads, a flag pole site and training and parade grounds are clearly evident.

The Millstream Falls campsites were built to hold almost 1000 men each and were mostly tent accommodation and cooking, latrine and washing facilities. A network of rock-lined granite paths and roads linked the facilities. Service units had extra facilities such as roads, car parks and vehicle ramps.

Units of the 7th Division, some returning from the Kokoda Trail, were the first to arrive and built the initial structures. They stayed for six months, leaving for New Guinea in mid-1943. The units of the 9th Division arrived at Millstream Falls in early 1945 and they improved the existing facilities, adding another 'layer' of history to the area. These units were also deployed to New Guinea, in mid-1945.

These training areas on the tablelands were used continuously until shortly after the war ended in August 1945. The facilities and structures were then demolished and most of the debris buried.

The Jirrbal people are the Traditional Owners of Millstream Falls National Park. Their dry forest and rainforest country extends from Herberton in the north, west to Ravenshoe, east to Evelyn Central and south to Davidson Creek at the bottom of Tully Gorge. Jirrbal people have an intimate knowledge of traditional country and close kin affiliations with neighbouring groups.