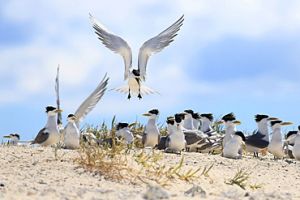 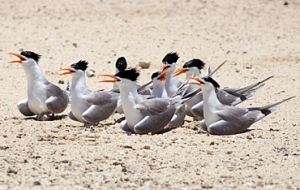 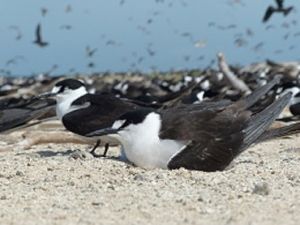 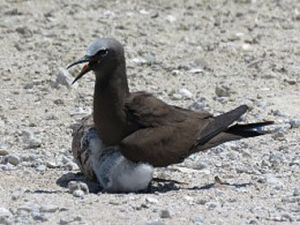 Graph showing number of breeding pairs for key species on Michaelmas Cay over the last year. Michaelmas and Upolu reefs are part of the Arlington reef complex, which sits atop a platform approximately 30m below sea level.

Michaelmas Cay is a leeside sand cay, running north-east to south-west, on the western tip of Michaelmas Reef. It was formed by the accumulation of broken coral, shells and remains of calcareous algae, continually washed over the reef by currents. Over time, seeds were deposited by visiting birds and the resulting vegetation helped to stabilise the cay. The formation of beach rock—sand and other reef remnants cemented into a rock by the action of algae—further stabilised the cay. Over the years the cay has built up and eroded away depending on wind, sea conditions and currents, with mobile spits at either end. Recent years have seen king tides wash right over the cay, stripping it of its vegetation and lowering its overall height.

In 1926, Great Barrier Reef Committee geologists drilled a bore hole on Michaelmas Cay to 182.8m. This revealed a sequence of reef rock extending to 115.3m, underlain by quartz sand.

Although Upolu Cay was formed the same way, it was never stabilised by vegetation or beach rock and so is more dynamic in shape, size and position.

The amount of vegetation on the cay has been slowly reducing over the years and when king tides washed right over it in February 2015 the cay was left with no vegetation for a year. There was concern that this may have a negative effect on seabird nesting, as many species like to nest among vegetation. Since February 2016 small patches of Sesuvium portulacastrum have reappeared and will hopefully increase and help to re-stabilise the cay.

In contrast to Michaelmas Cay, Upolu Cay has never been vegetated.

Michaelmas Cay is one of the most important seabird breeding areas on the Great Barrier Reef and birds nest on the cay all year round. It is a significant breeding site for four ground nesting bird species—common noddies Anous stolidus, sooty terns Onychoprion fuscata, crested terns Thalasseus bergii and lesser crested terns Thalasseus bengalensis. Nowhere else will you find these species breeding together in such vast numbers and in such an accessible location.

Michaelmas Cay hosts one of the largest breeding colonies of sooty terns in Queensland. Despite their preference to nest amongst vegetation, common noddies continue to nest on Michaelmas Cay. They often choose nest sites near objects that provide some form of shelter from the sun, such as driftwood, coral or even a coconut.

Seabird research has been conducted almost monthly on Michaelmas Cay since 1984 by QPWS resulting in the largest and most consistent dataset for any island on the Great Barrier Reef. Information includes details on species, numbers present, breeding, size class and vegetation cover.

Up to 20,000 pairs of seabirds have been recorded nesting on Micahelmas Cay—a daunting task to count! Sooty tern numbers usually peak in the winter, while common noddies, crested and lesser crested terns peak during the summer months.

Seabird breeding populations on Michaelmas Cay are naturally variable. Weather patterns, food availability and the size of the cay can influence numbers. Since surveys began in 1984, the breeding numbers on the cay have decreased then increased again. While these changes may just be natural fluctuations, there is concern that the recent loss of cay height and vegetation may reduce the capacity of the cay to sustain large populations of breeding seabirds.

Many seabirds nest on far more remote islands that are difficult to access and survey regularly. QPWS have been trialing new technologies to make seabird surveying easier. Between 2013 and 2015 a remote camera and digital sound recorders were trialed on Michaelmas Cay. The camera provided valuable insights into the merits of the system but malfunctioned twice following inundation by king tides and was removed in 2015. The density of nesting seabirds and the intensity of noise they made was so high that it made analysis of the acoustic data by automatically counting calls impossible. While neither method was suited to Michaelmas they provided us with valuable information about the limits of these methods that we continue to trial elsewhere.

Sound recorders allow us to collect daily information over weeks and months allowing us to gather sustained information rather than snapshots from 1 or 2 annual surveys. Because of this, and because of the consistent computer based analysis, the data can be more statistically robust and will allow QPWS to detect trends in seabird populations across the Great Barrier Reef.

Seabirds commonly roost, but rarely nest on Upolu Cay. The most recent, confirmed records of successful nesting were in 1983 and 1984 and include small numbers of lesser crested terns, crested terns and common noddies. Reduction in the size of the cay following cyclones and storms currently prevents breeding as the cay is frequently inundated during high tides.

The Australian Institute of Marine Science surveyed Michaelmas Reef 21 times between 1986 and 2009. Surveys show some decline in hard coral cover, but soft coral cover has increased in some parts of the reef. Giant clams Tridacna gigas are also scattered throughout the reef. Upolu Reef is shallower and its corals less abundant.

Michaelmas Cay was originally named Oyster Cay in 1849 when HMS Bramble anchored offshore. Upolu Cay and reef were named after the schooner Upolu that ran aground on the reef on Easter Sunday, 25 April 1886. The crew salvaged stores, collected the day before from Townsville, and ferried them to a sand cay three miles away.They set sail for Port Douglas in a lifeboat on 27 April and were eventually picked up by the Bulimba off Cape Grafton on 4 May.

Michaelmas Cay was used by the beche-de-mer (sea cucumber) industry from 1870 to 1900. Both cays were mined for guano (seabird droppings) from 1901. Guano mining was accompanied in the 1920s by the removal of thousands of tons of coral for agricultural lime from both cays and nearby Green Island.

Despite the early scientific interest and its declaration as a Fauna Santuary in 1937, Michaelmas Cay was used by the Australian Defence Forces for artillery and bombing practice between 1940 and 1945.

Michaelmas Cay and Upolu Cay were declared a single national park in 1975.