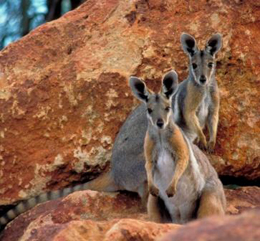 While at Mariala, look for yellow-footed rock-wallabies, echidnas and wallaroos during the cooler parts of the day.

Early morning brings with it the sights and melodic sounds of butcher birds, Hall's babblers, flocks of spiny-cheeked honeyeaters and the brilliant turquoise of Australian (mallee) ringnecks. Emus can often be seen through the thick mulga shrublands.

A number of rare and threatened birds live at Mariala, including the vulnerable Major Mitchell cockatoo and the rare square-tailed kite.

Once part of the Ambathala pastoral holding, the area was grazed by sheep and cattle from 1875 until the early 1980s. In the early 1900s the area was used to breed horses for Cobb & Co. stagecoaches. The holding was never intensively grazed or cleared for agriculture.

Mariala was declared a nature reference site in 1978 to allow studies of long-term changes in the mulga lands. In 1982 it became a scientific reserve, the first protected area to conserve part of Queensland's extensive mulga lands. Its tenure was converted to national park in 1992.