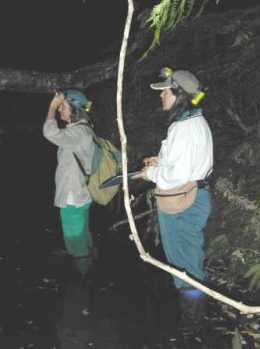 Mapleton National Park is located in the scenic Blackall Range, a landscape created by volcanoes and sculpted by water over millions of years.

At least 107 species of birds live in the Blackall Ranges parks. They include the Australasian figbird, which can be seen feeding on piccabeen fruits in the rainforest.

The endangered giant barred frog, Mixophyes iteratus, is found along shallow rocky streams or deep, slow moving streams in rainforest, wet open forest and farmland. During the 1980s, this frog disappeared from at least two streams in the Conondale Range, and populations continue to decline. The main threats to the giant barred frog are upstream clearing, decreased water quality and disturbance to riparian vegetation. Recovery plans are in place to try and halt the decline of this species. Cascade tree frogs, Litoria pearsoniana, have been increasing in numbers and have had their status upgraded from endangered to vulnerable—a step in the right direction!

For countless generations, the Blackall Range has held spiritual significance for many Aboriginal people throughout South-East Queensland.

When reserve status was rescinded, pastoralists and timber-getters came. In the 1880s prized timber including red cedar, white beech, bunya pine, blackbutt and tallowwood was logged in the Blackall Range. Widespread clearing of the tableland forests ensued as settlement proceeded. However, some small areas were set aside for recreation.

The first area to be protected was Kondalilla—in 1906 it became a recreational area, then a national park in 1945. Since then, reserves have been added across the Blackall Range to protect remnants of its natural communities. Kondalilla National Park (327ha) was linked to Obi Obi National Park in 1988. With additions, including former State forest, it has increased in size to an area of 1591ha.

Mapleton National Park (6455ha) was gazetted on 28 March 2014 and is an amalgamation of Mapleton Forest Reserve and Delicia Road Conservation Park.