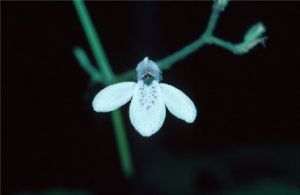 Rhaphidospora cavernarum, a large herb found in this section of park. Little terns can be seen on the beach at Cedar Bay. 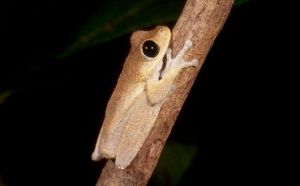 An Australian lacelid frog perches on a tree branch. Common tree snakes can be seen in this section of the park.

Mangkalba (Cedar Bay), Ngalba Bulal National Park is within the Wet Tropics World Heritage Area (WTWHA). Proclaimed in 1988, the WTWHA extends for about 450km between Cooktown and Townsville. Consisting of nearly 900,000ha, vegetation is primarily tropical rainforest, but also includes open eucalypt forest, wetlands and mangrove forests. The WTWHA meets all four natural criteria for World Heritage listing. These criteria recognise the area’s exceptional natural beauty and the importance of its biological diversity and evolutionary history, including habitats for numerous threatened species. The WTWHA also has cultural significance for a number of Aboriginal people who have traditional links with the area and its surrounds.

Find out more about the Wet Tropics World Heritage Area and its management.

Mangkalba (Cedar Bay), Ngalba Bulal National Park protects around 40 vegetation community types—the majority of which are of conservation significance. Over 900 plant species including 45 threatened species have been recorded—mostly rainforest plants. Forty-five threatened flora species have been recorded, mostly rainforest plants. These include the large herb Rhaphidospora cavernarum, recently rediscovered after being presumed extinct, as well as near threatened (rare) and vulnerable trees, shrubs, grasses and orchids.

Most of the area is covered in tropical rainforest. The most extensive types of rainforest are the species-rich mesophyll (large-leaved) and notophyll (medium-leaved) vine forests that dominate the park’s mid-altitude slopes.

Both lowland and upland rainforest types occur in this section of the park, which ranges from sea-level to 1148m at Mount Finnigan. Lowland forests include significant areas of endangered complex mesophyll vine forest on fertile alluvial soils, occurring on the small coastal plains behind the bay. This rainforest type has been extensively cleared elsewhere in the Wet Tropics. Upland rainforest includes simple microphyll (small-leaved) vine and fern thickets on the cloudy, higher slopes of Mount Finnigan.

Virtually all of the vegetation communities along this section of the park’s coastline are of conservation significance. These include native grasslands on rocky headlands, vine forests on beach sands and mixed woodlands of eucalypts, she-oaks, wattles and tea-trees.

The rainforest of Mangkalba (Cedar Bay), Ngalba Bulal National Park is home to a variety of wildlife from rare mammals and colourful birds, to endangered frogs and venomous snakes.

Currently 56 species of mammals have been recorded in Mangkalba (Cedar Bay), Ngalba Bulal National Park, including the Bennett’s tree-kangaroo, spotted-tailed quoll and a number of bat species.

The Bennett’s tree-kangaroo Dendrolagus bennettianus is a secretive mammal that lives in lowland and highland rainforest between the Daintree River and Cooktown. This elusive animal feeds mainly on leaves and fruit during the night. Daylight hours are spent asleep, crouching in the crown of a tree or on a branch.

Endangered spotted-tailed quolls (northern subspecies) Dasyurus maculatus gracilis are amongst the largest carnivorous marsupials. At night they hunt prey such as birds, rats, possums and reptiles—basically anything they can catch. These quolls are under threat from land clearing and direct competition from feral cats and foxes. This is why the protection of their habitat in places like Mangkalba (Cedar Bay), Ngalba Bulal National Park is so important.

Around 260 bird species have been recorded in this section of park and along the coastline. Of these, three species are listed as endangered under the Nature Conservation Act 1992: the southern cassowary Casuarius casuarius johnsonii, red goshawk Erythrotriorchis radiatus and little tern Sterna albifrons.

The Eastern Kuku Yalanji have kept their language and culture very much alive and are active in looking after their Bubu (country).

The Cedar Bay area was developed for tin mining from the 1870s onwards, with outposts such as Rossville and the Lion’s Den. The walking track from Home Rule Rainforest Lodge into the national park was once an old donkey track used by tin miners. Remnants of tin workings can be seen between Black Snake Rocks and the national park boundary. A local character called William 'Cedar Bay Bill' Evans later grazed stock on a large area near Ashwell Creek.

In the 1970s and 1980s, Cedar Bay became popular with people in search of an alternative lifestyle who were attracted to its remoteness and idyllic landscape. Living in the rainforest, they planted exotic fruits along with other plants that have now grown to become serious weeds. The legacy of this era is still visible in 'Centre Garden' at the south end of the beach, where remnant exotics are slowly being replaced by native vegetation.