For millions of years extensive volcanic activity occurred across the tablelands. Numerous volcanoes erupted and lava flows spread out across the landscape. Today conical hills, flooded craters and rich red soils, like those at Malanda Falls, bear witness to these geological events. 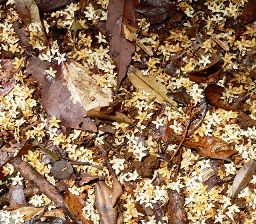 Winged fruit of a tulip oak. 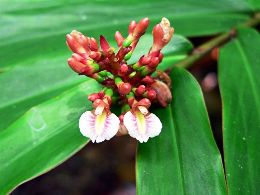 Look for ginger flowers along the walking tracks.

At the start of the tulip oak walking track, near the falls picnic area, the forest has higher diversity than other parts of the track. This wetter gully area has experienced fewer disturbances in the past and has a greater variety of tree species, epiphytes and vines. The large trees are Queensland maple Flindersia brayleyana, watergums Syzygium gustavioides and three species of tulip oak—the red tulip oak Argyrodendron peralatum, booyong Argyrodendron trifoliolatum and Boonjee tulip oak Argyrodendron sp. The understorey is full of gingers, cunjevois and ferns.

As the track climbs onto the flat, the forest becomes drier and more disturbed. In the early 1900s, when the Malanda area was settled by Europeans, this area may have been partially cleared and possibly even burned. The three species of tulip oak are common here, as well as milkbush Neisosperma poweri, lemon aspen Acronychia acidula, black bean Castanospermum australe and big leaf bollywood Litsea leefeana.

Vines and climbing palms also benefit from rainforest disturbance. Vines like whip vine Flagellaria indica, native bryony Diplocyclos palmatus and native grapes like Cayratia japonica are growing rapidly in the extra sunlight. The climbing palms, better known as wait-a-while or lawyer cane, are also flourishing. Two species are found on this walk—the hairy mary Calamus australis and fish-tail lawyer cane Calamus caryotoides. Don't be alarmed if you become caught in these scrambling palms. They are not poisonous, but their tiny curved spines can catch on clothing, backpacks and skin. To remove them, take hold of the tendril and unhook the spines.

Be aware that stinging trees are found along this section of the track. Gympie stingers Dendrocnide moroides are native to this area and have flourished after Cyclone Larry. Although they are an important contributor to the natural environment, they are dangerous to people. The leaves, stems and fruit of the stinging tree are covered with tiny silica hairs that inject neurotoxins. The sting is extremely painful and symptoms can persist for several months. Dead stinging trees are also dangerous—when disturbed they release a cloud of stinging hairs which can cause problems if inhaled. Dead leaves will also sting if handled. While walking in Malanda Falls Conservation Park, look for large, heart-shaped leaves with serrated edges, and white to red fruits that resemble raspberries. If stung, and symptoms are severe, seek medical advice.

At the start of this track, the trees are bigger, there are more epiphytes and the understorey is better developed than other areas. There are fewer tulip oaks than across the road, but a greater diversity of canopy trees including Queensland walnut Endiandra palmerstonii, scrub turpentine Canarium muelleri, black bean Castanospermum australe, watergum Syzygium gustavioides, big leaf bollywood Litsea leefeana and yellow walnut Beilschmiedia bancroftii.

As the track nears and follows the North Johnstone River, the higher humidity encourages native gingers and several species can be seen.

After the track leaves the river the forest begins to show evidence of past disturbances, probably from clearing and burning when Malanda was settled in the early 1900s. Cyclone Larry has further contributed to the disturbance in this area. There are fewer large canopy trees and the canopy is uneven with many gaps. The trees are shorter and most have narrower trunks. Vines and weeds abound. 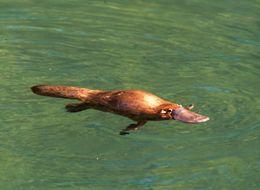 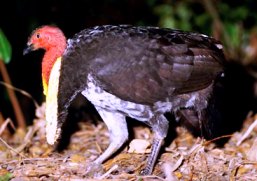 The Malanda Falls Conservation Park is rich in wildlife. During the day, look for sleeping Lumholtz's tree-kangaroos Dendrolagus lumholtzi and green ringtail possums Pseudochirops archeri in the canopy. These and other possums, reptiles, amphibians and insects can be seen while spotlighting at night. Read more about spotlighting.

Over 50 bird species have been recorded in Malanda Falls Conservation Park. Wet tropics endemics like Victoria's riflebird Ptiloris victoriae, grey-headed robin Heteromyias albispecularis and Bower's shrike-thrush Colluricincla boweri are often seen, as are the megapodes—the Australian brush-turkey Alectura lathami and orange-footed scrubfowl Megapodius reinwardt. Listen for the whip-crack call of the male eastern whipbird Psophodes olivaceus, followed by the gentler reply of the female. The staccato call of the Lewin's honeyeater Meliphaga lewinii and 'wallack-a-woo' of the wompoo fruit-dove Ptilinopus magnificus are also often heard.

Skinks are well represented in the Malanda Falls Conservation Park with six species confirmed in the area. Listen for them scurrying through the leaf litter and look for them basking in the sun on logs and roots. Eastern water dragons Intellagama lesueurii are regularly seen along the river, or sitting on logs or overhanging branches. Saw-shelled turtles Elseya latisternum are also common in the North Johnstone River. These turtles are unusual as they have the ability to 'breathe' through their cloaca anus. Water is circulated in and out of the cloaca where thousands of tiny blood-rich projections absorb oxygen—in a similar manner to fish gills. This ability to breathe through their cloaca allows the saw-shelled turtle to remain underwater for prolonged periods of time. A small amount of gaseous exchange also occurs through their skin. But, like most freshwater turtles, they still need to come to the water surface from time to time to take a breath via their lungs.

Aquatic animals are an important part of the North Johnstone River environment. Please do not disturb the delicate balance by feeding them or polluting their habitat.

The traditional tribal area of the Ngadjon-Jii covers the land between the headwaters of the Russell River, Bartle Frere, Boonjie, Dirran Creek, Mount Hypipamee, Lake Eacham, Malanda and the Barron River at Atherton. The community is divided into three clans—Ngunyunbara (upper Russell River), Nyletta (Wongabel) and Warribara (top of the Barron River). Each of these clans has its own dialect, and is made up of several family groups.

Ngadjon-Jii moved around their rainforest country, following the seasonal availability of food. Traditionally, in the cool, dry season months, they established temporary camps close to available resources. At the end of the dry season, edible foods in the rainforest reached their seasonal peak. Aboriginal groups from around the region, including Ma:Mu, Jiddabal, Yidinji and Giddmay people, came together at ceremonial bora grounds for initiations and dances.

At the beginning of the wet season, the Ngadjon-Jii came together, re-occupying more permanent camps of large, rainproof midja (thatched huts). These wet season camps were located close to running water to allow people to leach toxic nuts, the staple food at this time of the year. Towards the end of the wet season, as the availability of edible plant foods declined, the Ngadjon-Jii relied on stored nuts, not moving far from their midja.

Ngadjon-Jii society and country were formed by 'creator beings' in a very ancient time known as Wudu ('time before that'). These beings have homes in Ngadjon country; places which have great spiritual meaning. The most powerful of these places are Chullachillum (Bartle Frere), Naypanaypami (Mount Hypipamee), Winganar (Lake Eacham) and Buddine (the water of Lake Barrine).

These places, along with spiritual beings such as Yamani (rainbow serpent), have influenced the formation of mountains, river and forests in the past and continue to do so today.

A network of walking tracks links Ngadjon-Jii cultural sites, camping grounds and places for hunting and gathering food. Many of these walkways were developed into logging tracks, modern-day roads and forest walks. The track at Malanda Falls is part of a traditional rainforest 'highway'.

When the Malanda area was opened up for settlement in 1907 large areas of Ngadjon-Jii country was cleared for crops and cattle. Many of the European homes were built on traditional camping and ceremonial grounds, which were the only 'cleared' pockets of land in the rainforest.

In 1897, the government introduced legislation to 'protect' Aboriginal people. Some of the Ngadjon-Jii were forcibly removed to Mona Mona, Yarrabah and Palm Island missions. However most worked as domestic servants and labourers on the properties which now spread across their traditional lands. While working on the farms in the district, the Ngadjon-Jii still lived a traditional life—staying in midja in the remnant forest, hunting, fishing and gathering bush tucker while at the same time receiving food and blankets for payment for farm work. Living on traditional country and being close to kin allowed the Ngadjon-Jii to keep their culture strong.

Today the Ngadjon-Jii express their culture in many ways, while still respecting the traditions of their ancestors. Their involvement in tourism shows their desire to share their culture and to keep it alive in ways that provide opportunities for their young people. Ngadjon people are employed as park rangers, tour guides, consultants and artists. They are involved in the management of their traditional lands under the guidance of the Elders.

From 1882, Christie Palmerston explored this area, leading the way for timber cutters, prospectors and land surveyors. The first settlers to Tutamonlin (later changed to Malanda because of confusion with nearby Tumoulin) arrived in 1907. They cleared the rainforest for houses, crops and cattle. Only remnants of the original forest remain today, Malanda Falls Conservation Park being one of them.

Malanda Falls was also used by the Australian Army as a recreation area during World War II. It was possibly also an overnight camp for troops travelling to and from Townsville.