Lizard Island, Queensland, has a dry environment and is clad in grasslands and open woodlands. 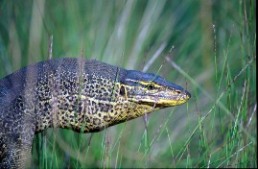 Yellow-spotted monitor—after which the national park was named. 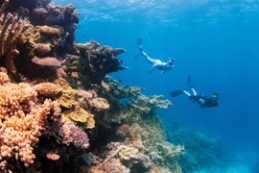 Ribbon reefs form a broken barrier along the edge of the continental shelf, near Lizard Island, Queensland. Lizard Island, Queensland, has many links with early European exploration of the region. Watsons cottage ruins are a significant historic feature of the island. For the Dingaal Aboriginal people, the islands are part of a cultural landscape.

The islands of the Lizard Island group are continental—part of the Australian mainland—and became islands only 9,000 years ago with the last sea level rise. The pink-grey granite rocks are much older, having formed deep below the earth's surface about 300 million years ago. Slow cooling underground caused the molten rock to solidify. The overlying rocks eroded and the entire landscape was uplifted and tilted, exposing the granite hills seen today. The granite landscape continued to change—mountains were formed, eroded and submerged by sea as the land mass drifted between the South Pole and the equator.

Granite decomposes to an infertile, sandy soil which drains rapidly. The sand on the islands’ beaches is made of decomposed granite with the addition of coral and shell fragments. Aboriginal middens—evidence of long-ago feasting by the Dingaal Aboriginal people on clams, oysters, spider shells, trochus and other shellfish—are found in coastal dunes and contain valuable archaeological information.

The combination of the island group’s geology and high seasonal rainfall determines the types of vegetation.

A dry island, almost 60 per cent of Lizard Island is covered in grasslands. Grasses Themeda spp. can survive the heat by folding up their leaves during the hottest part of the day to conserve water. Grasses are found on hillsides and in broad valleys where well-drained granitic soils have developed. Eucalypt and acacia woodlands grow on the sheltered north-west side of Lizard Island. Woodlands comprising acacias and a small well-branched tree, Thryptomene oligandra, grow on silica-rich sands on the western and southern side of the island.

Mangroves thrive in the salty tidal area around Watsons Bay, Crystal Beach and in Blue Lagoon at Mangrove Beach. Three species of mangroves are found on Lizard Island, with some trees reaching over 4m in height. Mangroves can use salt water; some species have special means of excreting the excess salt through the leaves. Paperbark and pandanus swamps are found in the valley behind Watsons Bay, nourished by rainwater that accumulates underground in the porous soils of the valley. These swamps in turn provide food and shelter for many birds, bats and reptiles of the island.

The coast and other sandy areas support dune grasslands and low scrub which reduce wind erosion on the dunes exposed to the strong south-easterly winds. Older fine-grained white sands, composed entirely of quartz (broken-down granite), have accumulated in the saddle on the western ridge of the island. Wind-blown and leached, these sands are relatively infertile and support closed scrub and heathlands dominated by Thryptomene oligandra and acacias.

Over 350 species of hard corals form the framework of the intricate and complex reef communities that surround the islands. Narrow fringing reefs rise steeply from depths of 20m along the steep eastern and north-eastern coastline of Lizard Island. A more extensive reef has developed on the south coast, connecting Seabird Islets with Palfrey and South islands, enclosing a deep lagoon (Blue Lagoon). The reef slopes are dominated by branching and plate corals Acropora spp. and other corals including boulder corals Porites spp. and fleshy soft corals.

In Watsons Bay, close to the beach, is the well-known Clam Gardens, a popular snorkelling location featuring large giant clams Tridacna gigas as well as many soft and hard corals. The sandy sea floor in outer Watsons Bay, at depths below 15m, is home to a diverse array of specialised marine life such as feather stars, sea pens and sponges as well as a unique assemblage of eight species of free-living (or solitary) corals.

The edge of the continental shelf lies only 20km to the east of Lizard Island. Here ocean depths plunge between 2,000–3,000m into the Coral Sea. Ribbon reefs lie along the edge of the shelf, forming a broken barrier. Huge ocean swells buffet the wall-like reefs and strong tidal currents surge relentlessly through the narrow passages between them.

The yellow-spotted monitor Varanus panoptes is the most conspicuous of the 11 species of lizards on the islands. Most easily seen around the resort area on Lizard Island, it ranges all over the islands and preys on large insects as well as smaller lizards and frogs.

Many species of geckos and skinks can be seen in the vegetation beside walking tracks on Lizard Island. Pythons and tree snakes are common but the only species considered to be dangerous, the brown-headed snake Furina tristis, is rarely seen.

Green Chelonia mydas and loggerhead Caretta caretta marine turtles nest on the islands during summer and can often be seen in the shallow waters around the islands.

Black flying-foxes Pteropus alecto and several smaller insectivorous bats are found on the islands. By day, thousands of black flying-foxes congregate in noisy camps amongst the mangroves. Feeding after dusk on the nectar of melaleuca and eucalypt blossoms, the flying-foxes often shift camp around the island and may leave altogether for the mainland in times of poor flowering.

'It is mostly high land very rocky and barren except on the NW [north-west] side where there are some sandy bays and low land, which last is cover'd with thin long grass trees etc the same as upon the Main(land)’.

On his chart, Cook recorded the name, Lizard Island because of the large number of monitors seen on the island. ‘The only land-animals we saw here were lizards and these seem'd to be plenty which occasioned my naming the island Lizard Island.'

Visitors to Lizard Island can climb to Cooks Look, following the steps of Lieutenant Cook who climbed the island's highest point to find a way through the maze of reefs. Cook had already experienced the dangers of the reef, having run aground and then spending weeks repairing the Endeavour. Once again lost in the labyrinth of reefs, this time off Cape Flattery and ‘altogether at a loss which way to steer’, Cook ‘resolved to visit one of the high islands to discover more definitely the situation of the shoals and the channel between them.’

From the summit of Lizard Island, Cook ‘with a mixture of hope and fear... discovered a reef of rocks... extending farther than I could see, upon which the sea broke in a dreadful surf.' However he noticed a passage through which the Endeavour finally escaped only to struggle in the pounding, unfathomable seas beyond the outer barrier reefs. After several days the Endeavour steered back inside the reef through Providence Channel, ‘happy once more to encounter those shoals which but two days ago our utmost wishes were crowned by getting clear of ...’.

Cook's reports of a good anchorage and fresh water led other early survey vessels, including the HMS Beagle (1839), HMS Fly (1843) and HMS Rattlesnake (1848), to the area during the time of European exploration and settlement of Queensland's coast.

In 1860, the beche-de-mer (sea cucumber) industry was temporarily established on Lizard Island in the bay today known as Watsons Bay. The crew of the vessel, Julia Percy, built several grass huts and a large stone building that was intended as a store and drying room. Granite was quarried from a nearby outcrop, and beach sand and burnt coral (lime) were used to make the mortar. Beche-de-mer was collected from the reefs surrounding nearby islands to be boiled, dried and sold to Asian markets. This first effort appears to have failed after several months and the site was abandoned.

The Watsons' and Dingaal stories

In 1879 Robert Watson, and his partner Percy Charles Fuller established another beche-de-mer operation. Robert Watson appears to have modified the abandoned stone cottage in Watsons Bay to make a home for his small family. Clay floors and a roof of corrugated iron covered in thatch completed the Watsons' cottage.

In 1881, while Robert was away collecting beche-de-mer, a group of Dingaal people came to investigate smoke on the island. Unknowingly, the Watsons had intruded upon an island sacred to the Dingaal people. One Chinese servant was killed and the others—Mary Watson, her baby and a wounded Chinese servant—fled the island in a beche-de-mer boiling tank. They died of thirst nine days later on the waterless Howick No. 5 Island.

Although the tragedy of Mary Watson is well-known, the subsequent deaths of many Aboriginal people in later retributions are often left untold. Today the stone ruins of Watsons’ cottage stand as a poignant reminder of those early tragic encounters between Aboriginal people and the ‘newcomers’.

Since those early European visitors, sailing and fishing enthusiasts have continued to visit the area. Tourism became a major focus on Lizard Island and the first resort was opened in 1975; today the island hosts one of Australia’s premier resorts.

Lizard Island also became a centre for reef research when the Australian Museum established the Lizard Island Research Station in 1973, dedicated to supporting research into all aspects if the Great Barrier Reef. Tours of the research station, located on the south-west side of the island, are available at certain times.

The Dingaal Aboriginal people—Traditional Owners of Lizard Island, Jiigurru—have lived in this area for tens of thousands of years. Their occupation has spanned times of lower sea levels when the islands were connected to the mainland by grassy plains.

The Dingaal people have been active in assisting the Queensland Parks and Wildlife Service (QPWS) in the conservation and management of Lizard Island National Park. They have generously allowed the use of some traditional information so that visitors may share their appreciation for this special place.

Jiigurru is a sacred place for the Dingaal people. It was here that young boys were brought for initiation and that important meetings between Elders of neighbouring clans were held. These islands also provided a base for collecting shellfish, fish, turtles and dugong.

Like other Aboriginal peoples, the Dingaal believe the landscape and seascape of their country was created in the Dreamtime. An important creation story for the Lizard Island group is associated with the stingray—Jiigurru forms the body of the stingray while North Direction Island, South Direction Island and Dingaal (Cape Flattery) form the tail.