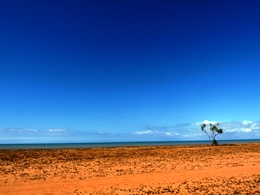 The natural and cultural values of the park are inseparable.

Lama Lama National Park (CYPAL) is in the Cape York Peninsula bioregion, east of the Great Dividing Range. It lies partly within the Laura lowland basin and straddles the Coen and Quinkan geological regions as well as the northern part of the Etheridge province.

The major feature of the park is the Annie River. This river forms the southern boundary of the park and flows downstream into the adjoining Rinyirru (Lakefield) National Park (CYPAL) and out into Princess Charlotte Bay. Much of the northern half of the Annie River catchment is contained within the park. The catchment drains from the sandy hills in the west, onto the eastern coastal plain, where it forms a network of densely-braided streams.

The coastal plain features beach ridges, tidal flats and scattered sand dunes. At the coast and surrounding the major drainage lines are alluvial plains, which flood annually during the wet season. Further inland, the central western country is mostly sandy hills and, on the western boundary, lies some of the oldest outcrops of metamorphic rocks on Cape York Peninsula.

A number of significant plant communities occur within the park, but one in particular, the messmate woodlands (dominated by Darwin stringybark Eucalyptus tetrodonta), is very special. It provides nesting habitat for the endangered red goshawk.

Other plant communities include vine thickets on the beach ridges; paperbark woodlands (dominated by tea-trees Melaleuca viridiflora) on the alluvial plains; tussock grasslands that extend along drainage lines of the marine and alluvial plains; and sedgelands that characterise the edges of lakes and lagoons.

The Lama Lama people living on country and in Coen today are the direct descendants of people who were forcibly removed from Aakurru (their homelands) under the Department of Native Affairs Act 1961. They were sent to live in communities at Lockhart River, Bamaga, Palm Island, Yarrabah and Cowl Creek (now Injinoo).

The Port Stewart Lama Lama people were removed from their homes near the mouth of the Stewart River by the police in 1961, they were taken by boat to Bamaga (at the top of Cape York), their homes were burnt and their dogs were shot. In the following twenty years, Lama Lama people made their way back to the Port Stewart area and have started living in Coen, which is the nearest town.

During the 1970s many Lama Lama people visited the Port Stewart area on weekends and holidays and in the 1980s some families made a permanent camp at the site on the bank of the Stewart River, called Theethinji.

In 1992, the Queensland Government returned ownership of a public purpose reserve to the Lama Lama people. In 1997, a house was built for Lama Lama at another camp on the river bank upstream from Theethinji. This site is called Moojeeba after a nearby waterhole.

From the early to mid 1900s, the area was managed as Lilyvale Pastoral Holdings and Binyo Timber Reserve 3. The Lama Lama people played a major part in the establishment of the Cape York Peninsula cattle industry and their involvement was critical to its success. Most reminders of this history are located on adjacent properties.

In 2008, Lama Lama National Park (CYPAL) became Queensland’s first jointly managed protected area. It is jointly managed by the Lama Lama Land Trust and the Queensland Government, in accordance with an Indigenous Management Agreement and other land management arrangements. The country is managed in a way that recognises the importance of the country to the Traditional Owners, while being driven by biodiversity conservation based on the keystone that natural and cultural values are inseparable. Read more about joint management of Cape York Peninsula national parks.