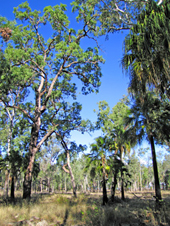 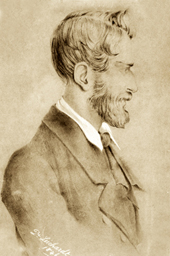 Shoes of a shod bullock (attached to bone) found on Mount Morris Station in 1902. They are thought to be from one of Leichhardt's bullocks.

The bed of Lake Murphy is perched higher than that of nearby Robinson Creek. It can only fill after heavy rains cause Robinson Creek and other lakes and dams west of here to overflow.

When full the lake has many water birds. Wading birds jostle for position in the shallows while ducks, pelicans and black swans swim gracefully over deeper water. Some birds even breed here.

Many birds can be heard here, but they may be hard to see. Both living and dead trees, shrubs and ground covers provide shelter, food and breeding places for these and many other animals. A walk at night may reveal brushtail possums, sugar gliders and greater gliders.

Kangaroos and wallabies can be seen in the forest and at the edges of the lake, while frogs and reptiles live throughout the reserve.

While much of the landscape has changed since 1844, the large number of old or dead trees here indicate that this reserve has never been cleared. Lake Murphy is part of our natural and cultural heritage, a home for wildlife and a place for us to enjoy.

Leichhardt and his party had been travelling for seven weeks on their expedition from Moreton Bay to Port Essington (300km north of Darwin's present location) when they camped at this spot. Their journey north was to take another 12 months. Progress was slow, as the dense brigalow scrub forced them to make many time-consuming detours and their bullocks were ill-suited to travel in such country. By the time they had reached the Taroom area, however, they were becoming proficient at picking their way through the scrub and in finding and preserving food. Leichhardt was an astute observer of the land he travelled through—the blank map he had started out with was carefully being filled with his detailed observations.

Leichhardt's party eventually reached Port Essington, after travelling 4800km. Returning to Sydney by boat, Leichhardt and the six men of his party were welcomed and rewarded with £1000. Leichhardt mounted two further expeditions, but disappeared without trace somewhere west of Roma on the second of these in 1848.

The local community is proud of its heritage. It was active in the conversion of this 550ha reserve to a Departmental and Official Purposes (Environmental Protection Purposes) Reserve in 1986. Lake Murphy is now a Conservation Park.

The Banana Shire Council and the Queensland Parks and Wildlife Service are joint trustees of this park. Joining with the Upper Dawson Branch of the Wildlife Preservation Society of Queensland in 1994, they provided day-use and camping facilities to commemorate the 150th anniversary of Leichhardt's passage through this area. Assistance was also provided by the Gaming Machine Community Benefit Fund.