Lake Broadwater is not always full, and can be completely dry at times. Two extremes, from the late 1960s (top) and 1983 (bottom) are shown here. Lilies bloom after rain in the woodland south-west of the lake. Golden-tailed geckos may be difficult to see, as they are nocturnal and often hide under loose bark. Water, grass and shade are all an eastern grey kangaroo needs on a hot summer day. 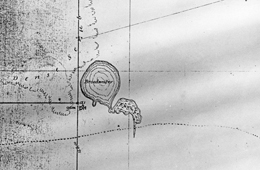 An 1864 map of Lake Broadwater shows dense scrub to the west and the old wagon track running east-west (from Jondaryan) on the southern side of the lake. A rim of original vegetation encircles the lake. 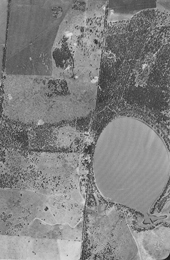 Due to expansion of agriculture, Lake Broadwater eventually became separated from other areas of bushland by cleared farmland. Lake Broadwater is the focal point of a 1,212ha conservation park situated in one of the most intensively cultivated agricultural districts in Queensland. The lake is a good example of a semi-permanent freshwater lake in an area where these are rare.

The conservation park is also one of a few locations on the northern Darling Downs where the landforms and soil types of the region remain uncultivated or ungrazed.

The lake itself covers approximately 350ha and is only 3–4m deep when full. Resembling a large tadpole from the air, Lake Broadwater lies on a broad alluvial plain which drains northwards into the Condamine River via Wilkie Creek. It is fed from two ephemeral streams (Broadwater and Surveyor’s gullies) draining a local catchment of about 6,000ha—most of which lies outside the park. Occasionally the lake floods during periods of summer rainfall, and may also dry out completely.

A low gravelly ridge divides Lake Broadwater from the alluvial plains along the Condamine River to the north. The lake itself was probably formed when high energy floodwaters spilling from the Condamine River gouged out a weak section of soil to form a depression. Subsequent high energy flood events would have continued to scoop it out and once the lake was deep enough, trees and shrubs could not regrow on the bottom. Vegetation which has grown up around the lake over time has acted as a silt trap and created a low levee around the lake. Survey records show that the lake has changed little since 1877. It is however slowly getting shallower over time.

From aquatic communities to those of dry inland areas, the plant communities within the conservation park are diverse. Over 450 species of plants have been recorded in the park.

It is of interest that considerable plant growth occurs in the lake itself. Apart from when the lake is full, vegetation protrudes above the water surface even a long distance from the shore.

Of the four wetland communities recognised at the lake, the open water communities and lake edge communities are regarded as the most important in ecological terms.

The open water is dominated by a range of species including: shiny nardoo Marsilea mutica, swamp lily Ottelia ovalifolia, native water hyacinth Monochoria cyanea and ribbonweed Vallisneria gigantea. River red gum Eucalyptus camaldulensis dominates the lake edge over an understory of grasses and sedges including Leptochloa spp., Cyperus spp. and Polygonum spp. River red gum seedlings that sprout in the nutrient-rich soil at the lake edge during dry times may not survive inundation for long periods when the lake fills again.

Riparian communities in inlet and outlet areas have a similar structure to the lake edge communities. Marsh communities are dominated by Myriophyllum striatum, Fimbristylis spp and Persicaria spp. Lake Broadwater is one of few protected areas where the fringe-rush Fimbristylis vagans—a near threatened species—has been recorded.

In addition to its wetlands, the forests, woodlands and grasslands of the conservation park provide secure habitats for many species of birds and animals in a region which has been extensively cleared.

Eastern grey kangaroos graze open areas while red-necked wallabies and swamp wallabies keep to thicker cover. Koalas find a home in the poplar box and river red gums, while lace monitors Varanus varius and yellow-spotted monitors Varanus panoptes are regularly seen foraging around the lake's edges. Many kinds of legless lizards, geckos, skinks and other kinds of reptiles find cover under rocks, logs and loose bark. Of the 56 reptiles recorded in the park, the golden-tailed gecko and the common death adder are listed as near threatened.

Lake Broadwater is a great place for frogs. Some, like the common green treefrog Litoria caerulea and the emerald-spotted treefrog Litoria peronii, make their home in vegetation above ground. But many more of the 21 recorded species at Lake Broadwater are small brownish-coloured terrestrial or ground dwelling frogs including the broad-palmed rocketfrog Litoria latopalmata and spotted grassfrog Limnodynastes tasmaniensis. Lake Broadwater is also home to several species of burrowing frogs, which come to the surface after rain or flooding. At such times, the lake and surrounds come alive with the sound of frogs feeding and breeding while conditions are right. It is only then that you might catch a glimpse of the strikingly-marked holy cross frog Notaden bennettii, scarlet-sided pobblebonk Limnodynastes terraereginae or the strikingly patterned greenstripe frog Cyclorana alboguttata.

As the lake fills with water, waterbirds of all sizes come from near and far. Almost overnight, flocks of black-tailed native-hens, glossy ibis or whiskered terns can appear where once the lake was quiet. Small wading birds such as plovers, stints and dotterels feed on smaller invertebrates at the lake edge, giving way to larger birds such as black-necked storks, eastern great egrets and white-necked herons—which can wade into deeper water to catch larger prey. A variety of ducks, grebes and fish-eating birds swim out into the middle of the lake. When the water remains for longer periods, black swans and magpie geese find sanctuary here. The freckled duck and cotton pygmy-goose are near-threatened species that have been seen at Lake Broadwater, as has the Australian painted snipe—a vulnerable species.

High overhead, white-bellied sea-eagles can sometimes be seen soaring. Although a long way inland, sea-eagles have been known to breed at Lake Broadwater when conditions are right. From black-shouldered kites and nankeen kestrels, to swamp harriers and little eagles, birds of prey of all sizes find suitable habitat and food at Lake Broadwater. The brown goshawk and the near threatened square-tailed kite have been recorded at the park.

Birds of special interest in the forests and woodlands surrounding Lake Broadwater include the bush stone-curlew, plum-headed finch and the turquoise parrot (listed as near threatened). Look overhead for honeyeaters gleaning nectar from blossoms and in the grass for finches, fairy-wrens and quails.

From birds to butterflies, frogs to fish, wildlife is all around you at Lake Broadwater.

Lake Broadwater and its surrounds were a focal point for local Aboriginal people and early European settlers alike. Aboriginal people camped here where the lake and its surrounds provided an abundance of food and a reliable water source, even in dry times. Remains of scarred trees and stone artefacts indicate this was a special place for the local community. The lake would have been a major camping point for groups travelling through the area, including those heading to feasts in the Bunya Mountains.

The area was later used for stock watering and grazing; first by travelling teamsters, then by settlers who made their home in the area.

Clearing of the land for agriculture was hampered by the thick scrub, heavy soil and lack of large equipment. By the 1950s, after the scourge of prickly pear was over, and the end of World War II returned men and heavy machinery to area, the clearing and ploughing of the fertile black soil plains began in earnest. The lake and its surrounds then became isolated by cleared farmland from other large areas of natural vegetation.

The lake was set aside as a camping and water reserve on the stock route used by teamsters, drovers and pioneers moving to and from the west. But its significance for that purpose faded after the rail reached Dalby and beyond in 1868 and a protracted drought left the lake dry for some time. In 1901, the lake was divided into four separate lots and sold by the Wambo Divisional Board to the owners of nearby 'Loudoun'. It was fenced off and closed to the public.

Locals advocated incessantly for the re-acquisition of the lake for the public. Although it remained in private ownership, the owners sometimes gave permission for its use—with limitations and strict conditions. In the early 1930s, a committee formed to acquire a portion of the lake for public access and lobbied Mr W. A. Russell M.L.A to negotiate with the owners of 'Loudoun' for the sale of 16ha on the western side of the lake. On 15 November 1931, the recreation area as we know it today opened to the public.

Around that time, an agreement was signed for the right to establish 'a resort' and sell food and drink and run dances. In return, the proponents were to act as caretakers and to construct a dance hall, kiosk, caretaker residence, bathing sheds and toilets in the general vicinity of where the facilities are today. One of the difficulties with running a business at the lake was that it would periodically go dry. That, combined with limited motor transport at the time, made the arrangement non-profitable.

The other blocks encompassing the lake were sold off over the years to different owners. For many years, efforts were made to purchase those blocks in order to make the whole lake a public recreation area. Realising the natural value of the area, the Dalby Branch of the Wildlife Preservation Society acted swiftly when the then owners died, and successfully lobbied for the purchase of the lake by the Queensland National Parks and Wildlife Service. An agreement was also reached with the trustees of the existing recreation area to transfer that area as well. In March 1981, the 1,220ha Lake Broadwater Environmental Park was gazetted with Wambo Shire Council appointed as trustees.

In December 1994, Lake Broadwater Environmental Park was re-gazetted a Conservation Park under the Nature Conservation Act 1992—allowing the public continued access to the lake. The recreation area of 8ha on the lake’s western shore, comprising the picnic and camping areas, amenities block and hall, was reclassified from the park in 2004 and is managed by the now Western Downs Regional Council under a special lease. Council remains the trustee of Lake Broadwater Conservation Park and undertakes its day-to-day management.