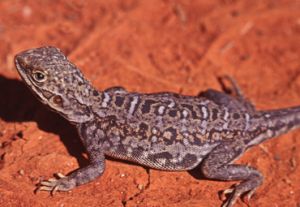 A painted dragon, one of many species of reptile that can be seen in Lake Bindegolly National Park. 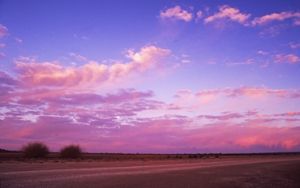 The lake system of Lake Bindegolly National Park is a vital refuge for wildlife of the arid zone.

After draining low hills and ranges in the north, Bundilla Creek floods into Lake Hutchinson, then Lakes Toomaroo and Bindegolly and finally into un-named lakes south of the park before petering out in sand plains and dune-fields. Usually only the main lakes contain water, but in exceptionally wet years the lakes join to form a continuous body of water from north to south. The lakes are dry about once a decade.

The park is home to more than 195 species of birds, 80 other kinds of animals and 300 species of plants. Saline Lakes Bindegolly and Toomaroo and freshwater Lake Hutchinson attract more than 60 species of waterbirds including pelicans, swans, a variety of waders and the near-threatened freckled duck Stictonetta naevosa.

Away from the lakes, parrots, galahs, cockatoos, honeyeaters and fairywrens are among the many animals seen. Wedge-tailed eagles, whistling kites and other birds of prey soar in the sky. Reptiles, at home in this harsh environment, include the tiny box-patterned gecko, skinks, painted dragons and sand goannas. Red and grey kangaroos are easily seen when they come to drink from the lakes, while tiny marsupials seek shelter in the samphire plants which grow in the salt-laden soils at the lake edge.

Lake Bindegolly was established in 1991 to protect the tree Acacia ammophila, which grows along the sand dunes fringing the eastern side of the lakes. This is only one of two known populations of this wattle, classified as ‘vulnerable’. The seedlings of this plant are often eaten by stock or parrots, but those that survive flourish into gnarled trees that become covered with beautiful yellow ‘puff-ball’ flowers—mainly after rain from March to October. The trees provide food and shelter to a range of birds.

Although samphire plants are able to withstand high salt levels and long periods both in and out of water, they are easily destroyed by trampling. Please stay on the tracks.

Lake Bindegolly National Park was formerly part of the grazing property ‘Dynevor Downs’—one of the original sheep properties settled in the Thargomindah area. Up to two thousand bales of wool were consistently shorn annually at ‘Dynevor Downs’ during the early 1940s.

Dynevor Lakes, as they were known locally, were used by traditional owners as an important food source due to the abundance of nesting water birds. Black swans were particularly sought after.

Lake Bindegolly is a well-recognised birding site and has attracted bird watchers from all over the country for many years.