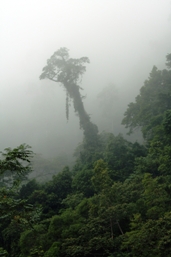 Mist-shrouded rainforest on the Kennedy Highway, which passes through Kuranda National Park. Kuranda and Mowbray national parks are within the Wet Tropics World Heritage Area (WTWHA). Proclaimed in 1988, the WTWHA extends for about 450 km between Cooktown and Townsville. Consisting of nearly 900,000 ha, vegetation is primarily tropical rainforest, but also includes open eucalypt forest, wetlands and mangrove forests. The WTWHA meets all four natural criteria for World Heritage listing. These criteria recognise the area’s exceptional natural beauty and the importance of its biological diversity and evolutionary history, including habitats for numerous threatened species. The WTWHA also has cultural significance for Aboriginal people who have traditional links with the area and its surrounds.

These parks form an important wildlife corridor between centres of biological diversity in the Lamb Range—Atherton Tableland area to the south, and the Daintree—Carbine Tableland to the north.

The tropical rainforest is home to the endangered southern cassowary Casuarius casuarius johnsonii, a flightless bird that can grow to 2 m in height, and the near threatened (rare) Lumholtz’s tree-kangaroo Dendrolagus lumholtzi. In summer it is sometimes possible to spot a male Victoria’s riflebird Ptiloris victoriae, an Australian bird-of-paradise, performing its extravagant display from an exposed perch.

Of all the wagon roads that opened up the frontiers of Queensland in the pioneering days, few were as important or as colourful as the old Port Douglas to Thornborough road. This road was the lifeline for a vast and remote area where mines, farms, stations and townships were being established.

Now known as the Bump Track, it was first blazed in April 1877 by Christie Palmerston, a prominent bushman and pathfinder of the times, following traditional Aboriginal walking tracks. Within months this track was the main access from the Hodgkinson Goldfield to the port facilities at Port Douglas and, with the construction of a branch road in 1880, provided access to the Herberton tin fields.

The Bump Track was infamous for its steepness. Passengers on the horse-drawn coach service had to get out and walk when going up or coming down the section known as Slatey Pinch. Later, motorists had to be helped up by horse teams and, coming down, they attached a log to the rear of their cars. This steadied the vehicle and acted as a brake. Abandoned logs at the foot of the Bump Track regularly became a nuisance and had to be burned.

Notorious sections of the Bump Track were given names. Slatey Pinch, less than 1 km from the bottom of the track, is a cutting through slate rock at a steep 1 in 3 grade. Horse and bullock teams had trouble gaining grip in this section.

The top of the climb, 1.5 km from the start, is followed by a relatively flat section known as The Landing. This was a common rest point for teams that had just completed the steep haul.

Robbins Creek, 4 km from the start, was originally served by a timber bridge. Some remnants of this exist today. After the Robbins Creek crossing is a short hill known as The Gluepot. The soft, greasy rock here created a particularly sticky mud which often caused teams to get bogged in wet weather.

Traffic on the Bump Track was once very heavy. Track width was designed to cater for this and in places it would have been up to 100 m wide. This is still obvious due to the regeneration of pioneer wattles Acacia sp. on the track margins.

The completion of the Cairns to Mareeba railway in 1893 and the Cook Highway between Cairns and Mossman in 1933 reduced the importance of the Bump Track. However, amid fears of Japanese invasion during World War II, the track was an integral part of a coastal evacuation plan. As the only road over the range at that time, the Bump Track would be the only escape route for residents as well as the only inland route for invading forces. Anticipating invasion, the Australian Army laid land mines along a half mile section of the track just below Slatey Pinch. In the event of Japanese invasion all transport would be commandeered and residents would be evacuated. The track would be blown up after the last vehicle had passed, effectively sealing off the interior from the coast.

Japanese forces never invaded the area. After the war the mines were detonated, leaving behind three large craters that were gradually filled by erosion.