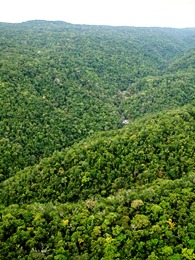 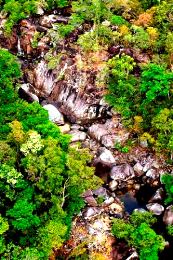 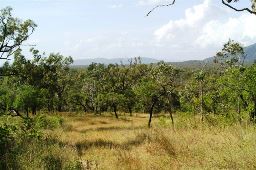 Woodlands on the plains. 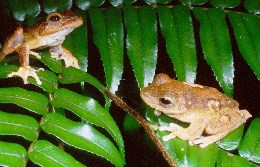 KULLA (McIlwraith Range) National Park (Cape York Peninsula Aboriginal Land) is an area of outstanding beauty and biological richness. Spectacular escarpments, gorges, waterfalls and rainforests are some of the many special features of this area.

The McIlwraith Range, the dominant feature of the landscape, is part of the Great Dividing Range, a chain of low mountains that lies parallel to the east coast of Cape York Peninsula, extending about 80km north to south. Most of the range is about 450m above sea level and reaches its highest elevation at 824m, just north-east of Coen. The park receives high annual rainfall of about 1500mm.

This magnificent granite range is a remote scenic wilderness with striking landforms including rugged mountains, steep escarpments and gorges, particularly on the eastern coastal face. Clear, mountain streams cascade into the valleys and flow out onto the surrounding plains.

Other significant plant communities in the McIlwraith Range area include wet sclerophyll forest, which grows along the fringes of the rainforest, and a special mix of eucalyptus and broad-leaved tea-tree Melaleuca viridiflora woodland that occurs on the plains and drier mountain ridges and slopes. Outstanding paperbark forests line the many rivers and creeks, but of particular significance are areas of hoop pine, considered to be the largest remaining, undisturbed stands in the world.

The McIlwraith Range is the southernmost extent of some tropical rainforest plants and animals from New Guinea. This range and adjacent rainforests form a large refuge that is important for the continued survival of species of recent New Guinea origin, as well as many older Australian species. Some rainforest animals shared with New Guinea include the common spotted cuscus Spilocuscus maculatus, magnificent riflebird Ptiloris magnificus and trumpet manucode Phonygammus keraudrenii.

The region is high in biological richness with numerous endemic, near threatened (rare) and threatened species. It boasts at least 16 plant species known only to the McIlwraith Range area. Of all the plant families in Australia, 72 percent are found in the McIlwraith Range area. There are 92 plant species listed as near threatened or threatened, making this region one of Queensland's most important areas for plant conservation. Some of the special plants include the brown antelope orchid Dendrobium johannis and the climbing wattle Acacia albizioides.

In the McIlwraith Range area there are 56 animal species that within Australia are entirely restricted to Cape York Peninsula with 28 listed as near threatened or threatened. These include southern common cuscus Phalanger mimicus, cassowary Casuarius casuarius johnsonii (northern population) and palm cockatoo Probosciger aterrimus. The spectacular green python Morelia viridis and growling green eyed frog Litoria eucnemis are also known inhabitants of the area. The Aboriginal Traditional Owners for this country belong to four clan groups: Kaanju, Umpila, Lama Lama and Ayapathu. The park name is an acronym for these groups' names.

Aboriginal people have occupied and used the McIlwraith Range area for thousands of years. The area is a cultural landscape rich in history, stories, camping places, ceremonial sites and dreaming trails. The Massey River Area is a restricted access area (PDF, 231.6KB) , established to protect cultural resources which are of particular significance to the Umpila clan.

On 26 December 1879, during a prospecting expedition, Robert Logan Jack, an ex-Government geologist, named the McIlwraith Range after Thomas McIlwraith, the eighth Premier of Queensland.

A small number of mining leases were subsequently held in the Leo Creek area, but little gold was found.

In March 1995, the Queensland Government and Traditional Owners agreed to the creation of areas of Aboriginal freehold and areas of national park however both forestry and mining interested opposed the gazettals.

The park is jointly managed by the KULLA Land Trust and the Queensland Government, in accordance with an Indigenous Management Agreement and other land management arrangements.