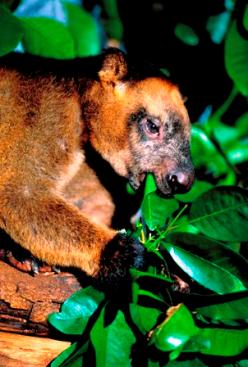 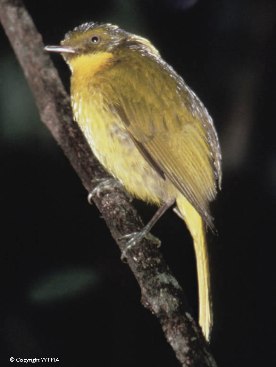 The transition between vegetation types in Koombooloomba National Park and Conservation Park supports a wide range of animal life. Many of these animals are only found in the Wet Tropics.

In the rainforest look for Lumholtz’s tree-kangaroos Dendrolagus lumholtzi and golden bowerbirds Amblyornis newtonianu. The near threatened (rare) Lumholtz’s tree-kangaroo has distinct body characteristics to enable them to live in trees. An exceptionally long, pendulous tail helps with balance while strong forelimbs and short, broad hind feet help with balancing, gripping and climbing. Curved claws and spongy soles and palms also help with gripping and climbing. The Lumholtz's tree-kangaroo eats mostly leaves but also fruit and flowers from a wide variety of native trees and some weeds.

Yellow-bellied gliders Petaurus australis (unnamed northern subspecies), like so many animals found in wet schlerophyll, have close relatives in similar habitat further south but have been isolated from the main population long enough to become a subspecies. The southern subspecies feed on sap from over 20 different tree species but the ones in the north eat sap only from red mahogany Eucalyptus resinifera trees. Their diet also includes arthropods and pollen and nectar from a wide range of rainforest and open forest trees and shrubs. Also known as the fluffy glider, yellow-bellied gliders are known for their particularly long bushy tail. They use this tail to carry leaves to line their communal den inside tree hollows. In most cases these trees are rose gums E. grandis but they do occasionally use other species.

Golden bowerbirds are only found in mist-draped rainforest above 900m altitude in north-east Queensland and they are Australia’s only representative of a group of maypole-building bowerbirds found also in New Guinea. Rich, golden-yellow and olive-brown, the males of this species live in loose clans, with as many as 10 to 15 birds in 40 to 50ha. Bowers are display areas built by male bowerbirds to attract females for mating. The male golden bowerbird keeps his bower site, year after year, defending, tending, refurbishing and extending the bower through most months. The two towers of the bower are made from twigs, glued with saliva and adorned with moss, grey-green lichens, pale flowers and fruit. From 1–3m high, the towers are built around two saplings, about a metre apart. These towers are bridged by a low branch or buttress, from which the male displays.

The vegetation in the Koombooloomba National Park and Conservation Park becomes drier as you move from east to west. The eastern parts of the park are closer to the coast and receive the prevailing wet winds. These conditions promote the growth of upland rainforest.

The western part of the park is in the rain shadow of the Cardwell Range where endangered wet schlerophyll forest grows on granite and rhyolite soils The forests contain rose gum Eucalyptus grandis, red mahogany E. resinifera, pink bloodwood Corymbia intermedia, turpentine Syncarpia glomulifera, Bakers oak Allocasuarina torulosa and stringybark pine (Callitris macleayana). Wet sclerophyll is fairly abundant in south-east Australia but in the north is restricted to wetter areas above 600m. In the Wet Tropics it is limited to a narrow, broken strip, 400km long, bordering the western edge of the rainforest.

Along the western boundary, in the driest part of the national park, dry forest of Queensland stringybark (E. reducta), turpentines (S. glomulifera) and black she-oak (A. littoralis) grow.

About 420 million years ago, when Australia was still a part of the ancient continent of Gondwana, the east coast was 20–150km inland of the present coastline. Over time, rivers running off the continent carried bits of land into the sea in the form of gravel, sand and clay. This material accumulated in an undersea basin known as the Hodgkinson Basin over the next 60 billion years.

About 360 million years ago these sediments were caught in a squeeze and were compressed, folded and lifted far above the sea, creating a series of mountain ranges that would rival today’s Andes or Himalayas in height. Sand, mud and gravel formed these mountain ranges, which were transformed into metamorphic rocks by immense pressure and heat. These are the rocks which form much of the landscape we see in the Wet Tropics today.

From 310 to 260 million years ago, other events deep in the earth’s crust caused further changes in the landscape. Large pools of molten rock (magma) pushed up into the crust. In many places it did not make it to the surface, instead slowly cooling and solidifying to form bodies of granite deep underground.

For over 100 million years there were no dramatic geological changes in the region. Instead, it was a long, stable period where mountains continued to rise, but were also subjected to the persistent processes of erosion. Gradually the granite, once deep below the surface, was exposed, and the covering rocks were weathered.

Climate, geology and resulting soils, combined with altitude, determine the forest type found in Koombooloomba National Park and Conservation Park. The granite rocks are acidic and have produced less fertile soils than those found in the basalt areas of the Atherton and Evelyn tablelands.

Koombooloomba National Park and Conservation Park are within the Wet Tropics World Heritage Area (WTWHA). Proclaimed in 1988, the WTWHA extends for about 450km between Cooktown and Townsville. Consisting of nearly 900,000ha, vegetation is made up of tropical rainforest, open eucalypt forest, wetlands and mangrove forests. The WTWHA meets all four natural criteria for World Heritage listing. These criteria recognise the area's exceptional natural beauty and the importance of its biological diversity and evolutionary history, including habitats for numerous threatened species. The WTWHA also has cultural significance for Aboriginal people who have traditional links with the area and its surrounds.

Timber was harvested throughout Koombooloomba National Park. The rainforest areas have been extensively logged while in the wet sclerophyll, harvesting was selective and the effect is barely evident today. The drier, western parts of the park have also been grazed.

The old Culpa township sprang up on the headwaters of the Tully River where gold was found around 1890. The area officially produced 300oz of gold before attention was turned to timber harvesting from the adjacent forests.

After World War II the electricity needs of North Queensland increased and the Tully River was selected to provide hydro-electric power. In the 1950s Koombooloomba Dam was constructed, followed by the construction of two separate hydro-electric stations. The small town of Koombooloomba, complete with a school, police barracks, store and cricket club, housed workers and their families during the dam’s construction. The current conservation park camping area is situated adjacent to the old cricket oval where the intact pitch can still be seen.

Water is captured from the dam and released back into the river through the 7.3 MW Koombooloomba hydro-electric station. From here the water flows approximately 13km to the Tully Falls Weir, just above the Tully Falls. The water is then diverted down the range, via a concrete intake structure, and into the 88 MW Kareeya hydro-electric station located about 2km below the falls and about 60 km north-west of Tully.

Koombooloomba Dam has a surface area of 1,550ha and an average depth of 12.9m. It holds approximately 205,000ML of water when full. The dam releases 364 billion litres of water (equivalent to 145,600 Olympic swimming pools) into its hydro-electric scheme annually, generating 22,500MW hours of energy. The power is exported to the local grid via a 17km long transmission line.

The dam is also used for recreational fishing and water activities. Sooty grunter and some barramundi have been stocked in the dam. Scheduled water releases from the dam support commercial white-water rafting in the Tully River.

The Jirrbal people are the Traditional Owners of Koombooloomba National Park and Conservation Park. Their dry forest and rainforest country extends from Herberton in the north, west to Ravenshoe, east to Evelyn Central and south to Davidson Creek at the bottom of Tully Gorge. Jirrbal people have an intimate knowledge of traditional country and close kin affiliations with neighbouring groups.