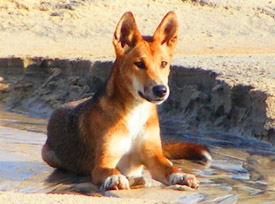 Photos from the population study

Queensland Parks and Wildlife Service has included images that show dingoes of different ages and at different times of the year. These images were selected from a broader image capture from November 2009 to August 2011. The photos provided observational data which formed only one part of the whole data set of a population study that started in 2009. Other sets included data from the satellite tracking project, scat collection and analysis, prey–habitat assessments, images taken by rangers on general duties and other images supplied by the community.

Some images show dingoes in threatening poses—tail up, ears forward and head bowed—as they test each other's place in the pack. In album 15 the camera captured a violent fight for dominance, which left the dingoes battle-torn and exhausted.

You'll see dingoes in different stages of development from pups and juveniles through to adults. A handful were fitted with radio collars in 2011 as part of the satellite tracking project, which has now completed collecting data.

The dingoes on Fraser Island are wild animals that live in packs and hunt freely. The gallery albums show snippets of their lives that cover almost two years of seasonal changes. As a rough guide, the packs' yearly cycles look something like this:

Autumn (March to May)

Pupping time means females are protecting their dens and the whole pack undertakes serious hunting to feed the extra mouths. Unlike domestic dogs, dingoes only have one litter of pups per year.

The pups are growing up, staying close to their parents and learning hunting and survival skills from them.

Pups are learning pack rules. Their play fights teach them about pack hierarchy and dominance testing.

Select an album from the photo gallery

Copyright protects the images in this photo gallery. Except for purposes permitted by the Copyright Act, reproduction by whatever means is prohibited without prior permission from the Queensland Parks and Wildlife Service, the Department of National Parks, Sport and Racing (Queensland Government, Australia).

The Queensland Parks and Wildlife Service undertakes constant monitoring of the dingo population on Fraser Island. The Fraser Island dingo management strategy underpins these monitoring activities. In 2009, the Queensland Government initiated the development and implementation of an extensive Fraser Island Dingo Population Study. This study, to be conducted over a two-year period, commenced in November 2009.

The results from the Analysis of the preliminary capture-mark-recapture experiment* (Appleby, R. and Jones, D. (2011)), which is part of the Fraser Island dingo population study stage 1, strongly suggests a current population of approximately 200 individuals on Fraser Island (a landmass of 166,000ha).

Projections indicate that dingo numbers vary depending on the seasons; increasing after breeding and subsequently declining due to natural attrition. Generally, a pack consists of up to 12 animals, but total dingo numbers and pack sizes again vary across seasons and years in line with the supply of vacant territories and natural food sources.

* Reference can be found in: Fraser Island dingo publications list.

It is illegal to disturb or feed wongari (dingo), which includes attracting them with food or food waste. On K’gari (Fraser Island) an increased maximum fine of $11,028 and an on-the-spot fine of $2,205 now apply to those people who break the law. Be dingo-safe.