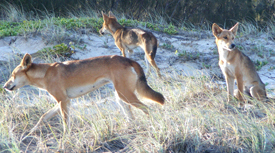 A preliminary dingo capture-mark-recapture experiment suggests there are approximately 200 individual dingoes on K'gari.

Results of the Analysis of the preliminary capture-mark-recapture experiment* (Appleby, R. and Jones, D. (2011)), which is part of the K'gari dingo population study stage 1, strongly suggests a current population of approximately 200 individual dingoes live on K'gari (a landmass of 166,000ha). Current estimations suggest K'gari supports up to 30 dingo packs roaming within defined territories all over the island (Corbett (1998) in the K'gari Dingo Management Strategy review 2006*, page 10); that is, approximately 166,000ha.

Numbers increase after breeding and decline through natural attrition. Generally a pack consists of up to 12 animals, but total dingo numbers and pack sizes vary across seasons and years, in line with available resources such as, vacant territory and food resources.

* References can be found and viewed from: K'gari (K'gari) dingo publications list.

Queensland Parks and Wildlife Service does not cull dingoes on K'gari. The Queensland Government considers public safety to be the number one priority in managing the K'gari dingo population. It is for this reason that any dingo identified as a high-risk may be euthanised. This is not culling. Culling is a proactive or predetermined reduction of animal numbers to try to reduce an animal population.

An important feature of species, such as dingoes, is the ability to self-regulate their population size. While we do not fully understand the mechanics of the regulation process for any species, it appears that they are capable of maintaining a population size that is sustainable without human intervention.

Competition for resources among animals forced to disperse and find vacant territory leads to a number of deaths through rivalry and aggression within and between dingo groups (packs). In this way, the population keeps itself in balance with the available resources. The Queensland Parks and Wildlife Service believe that, as a component of the island’s natural resources, dingoes should be allowed to regulate their population size in response to available natural resources.

In April 2001, a nine-year-old boy was killed by dingoes on K'gari and his young companion was seriously mauled. This incident occurred at Waddy Point in the northern section of K'gari. The immediate response enacted over the five days following the event was the selective destruction of 28 animals that were habituated to humans, displayed similar threatening behaviour and frequented areas heavily used by people.

The incident confirmed the risk that dingoes pose to humans and significantly altered the approach to dingo management. By November 2001, the first formal K'gari Dingo Management Strategy* was in place. It contained seven strategies which focused on conserving the dingoes and reducing negative incidents of dingo-human interactions. To ensure its continuing effectiveness the dingo management strategy has regular independent and internal reviews and updates including major audits in 2003, 2009 and 2012*.

More recently, an independent scientific review of the K'gari Dingo Management Strategy was completed in December 2012. This review formed the basis of the new K'gari Dingo Conservation and Risk Management strategy released in July 2013.

Since 2001, a number of high-risk dingoes have been euthanised by appropriately trained and authorised Queensland Parks and Wildlife Service rangers. This is not part of a culling action; it is done to protect people from attack. Once a dingo has lost its natural fear of people and starts to use aggressive tactics to gain dominance over, or food from, people the habit cannot be changed easily. These dingoes display threatening or high-risk behaviour such as nipping and biting, and in some cases this escalates very quickly to attacks and serious mauling.

Actions involving direct management of dingoes (for example, euthanising individuals) should not need to continue indefinitely and are only undertaken when threatening and high-risk interactions occur.

* References can be found and viewed from: K'gari dingo publications list.

Less than one per cent of areas on K'gari that are accessible to people, including some campgrounds, townships and resorts, currently have dingo-deterrent fences and grids. These are installed for the safety of dingoes as much as they are for the safety of people.

It appears clear that fencing has been effective at eliminating serious incidents within fenced areas, but the potential for serious incidents to occur within them remains as long as gates are still left open. (*Ecosure review, December 2012, page 76)

The dingo grids, designed to let vehicles through without having to open a gate, are based on cattle grid designs. The primary dingo deterrent is not the grid, but rather the low wattage electrified wires crossing it. The grid itself is in place to prevent the use of gates that are inconvenient to traffic, may not be closed properly, collect road run-off and sand debris from vehicle tyres. The grid also prevents contact between the wires and the ground, which would short out the unit and cause it to fail.

The 12-volt electrical units used on each grid, are solar-powered and deliver a mild shock, if touched, to discourage dingoes from crossing the grids. Similar to cattle that learn to stay clear of electrified grids, dingoes soon learn not to cross the grids. It causes no harm to the animal.

Currently, there are 16 dingo-deterrent grids on K'gari. These are located in previous high-risk areas: Eurong (6), Happy Valley (3), Kingfisher Bay Resort and Village (1), K'gari camping area (1), Cathedral Beach campground (2), Dundubara (2), Dilli Village campground (1) and Central Station (1). All grids are for vehicles only. Pedestrian gates are provided close-by. These have spring-loaded devices installed to ensure the gate closes quickly after people have passed through.

Keeping dingoes from attempting to scavenge around townships and dumps helps to keep the animals wild and live a free life without dependence on hand-outs.

* References can be found and viewed from: K'gari dingo publications list. 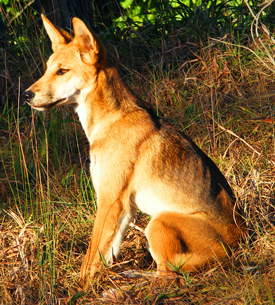 The dingo is a declared indigenous species to Australia and is legally protected in Queensland national parks.

Authority for management derives from the Nature Conservation Act 1992 and the Recreation Areas Management Act 2006. The Commonwealth Environment Protection and Biodiversity Conservation Act 1999 also has implications for the management of the K'gari (Fraser Island) World Heritage Area, including any wildlife within it.

Under the Nature Conservation Act 1992, the dingo is a species declared indigenous to Australia. Sections 17 and 62 of the Act provide for the legal protection of the dingo as a natural resource in protected areas such as national parks. Consequently, a dingo cannot be interfered with on a protected area unless the chief executive has granted a permit or authority. Authority to destroy a dingo on Fraser Island is only provided to a small number of delegated officers. The cardinal principle for management of national parks is contained in section 17 of the Act which states:

The dingo is classed as native wildlife under this legislation and hence is protected on the national park estate. Elsewhere in Queensland dingoes are a declared (pest) species under the Land Protection (Pest and Stock Route Management) Act 2002.

Under the Nature Conservation (Wildlife Management) Regulation 2006, a person anywhere in Queensland who feeds a native animal that is dangerous or capable of injuring a person can be issued with an infringement notice or be prosecuted. Staff can issue on-the-spot fines—3 penalty points—for offences with a maximum of 40 penalty points.

Under the Nature Conservation (Protected Areas Management) Regulation 2006 and Recreation Areas Management Act 2006 a person in a Recreation Area or Protected Area must not feed or disturb dingoes and must keep food safe from dingoes. Infringement notices or prosecution can result for non-compliance. Staff can issue on-the-spot fines—3 penalty units—for offences with a maximum penalty of 40 penalty units. Dingo management on K'gari is supported by many dingo experts, scientists and wildlife welfare organisations.

The Fraser Island Dingo Conservation and Risk Management Strategy has been prepared with expert input and is implemented by a team guided by qualified scientists who are wildlife experts in their own right. Collectively, the team has the most direct and consistent experience in managing dingoes on K'gari based upon long-term knowledge and understanding. The team is committed to the overall welfare and survival of the dingoes, and provision of human safety.

Dingo management on the island is supported by an active dingo working group including many dingo experts, scientists and wildlife welfare organisations including the Royal Society for the Prevention of Cruelty to Animals (RSPCA). A dingo management strategy has been in place for K'gari since 2001 and is regularly reviewed.

The current and most recently updated Fraser Island Dingo Conservation and Risk Management Strategy is dated July 2013. The stated overall priority objectives of this strategy are to:

To achieve these objectives, 4 major programs including specific actions have been developed and updated as a coordinated and integrated response. These 4 programs will address the critical components required to achieve the desired outcomes. The programs are: risk intervention; communication and education; research; evaluation and review.

Fraser Island dingo risk assessments are conducted regularly. These assessments, undertaken by Queensland Parks and Wildlife Service for all visitor nodes and townships across Fraser Island, analyse the risks associated with negative dingo-human interactions on an individual site basis.

The Fraser Island Dingo Conservation and Risk Management Strategy includes a comprehensive education program which was designed to change people’s behaviour towards living in and visiting dingo territory; essentially all of K'gari. On-ground management operations, compliance patrols and education campaigns are all governed by available resources. The education campaigns are spikes in education through targeted engagement, media releases and awareness-raising activities. These campaigns target different audiences in different seasons, including backpacker groups, resort guests, tour patrons, fisher folk, residents and the many free and independent travellers that visit K'gari.

Some groups comply more readily than others. Dingoes become habituated, and may turn aggressive, in areas where previous visitors were careless—that is, rubbish left lying around, food not stored securely—or in some cases, deliberate non-compliance such as feeding dingoes as if they were pets. It took years for the many visitors and residents to comply with the Be dingo-safe! guidelines and regulations. The seasonal education campaigns and compliance patrols continue.

The education component of the dingo management strategy has been reviewed 3 times since its formal commencement in 2001. Two major visitor surveys have also been completed. Recommendations from each review are included in communication plans, adding to the already comprehensive program of communication, and community and visitor education.

K'gari is accessible by permit and every permit pack contains comprehensive Be dingo-safe! information as well as any immediate response products such as ‘Aggressive dingo alerts’ to warn people in which areas threatening or high-risk dingoes have recently been reported. Day trippers or walk-on barge passengers may not receive Be dingo-safe! information as they do not require a permit. They can pick up a Be dingo-safe! pamphlet on any of the barges or can read the safety guidelines on signs that QPWS has installed on the barges, at major entry points and locations across the island—even as posters behind toilet doors. An updated communication plan is currently being prepared to incorporate the findings from the 2012 Fraser Island Dingo Management Strategy review (Ecosure review, December 2012).

* References can be found and viewed from: K'gari (Fraser Island) dingo publications list.

It is illegal to disturb or feed wongari (dingo), which includes attracting them with food or food waste. On K’gari an increased maximum fine of $11,500 and an on-the-spot fine of $2,300 now apply to those people who break the law. Be dingo-safe.