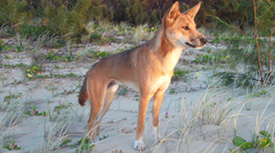 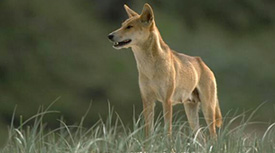 The average adult dingo (2+ years) in Australia stands 570mm at the shoulder, is 1230mm long from nose to tail tip and weighs 15kg (Corbett, L 1995, The Dingo in Australia and Asia, UNSW Press, Sydney). Data gathered over the last nine years shows Fraser Island’s dingoes are about the same size as dingoes from other areas and, if anything, a bit heavier. They certainly are not leaner than dingoes from other areas. The table below shows weight comparisons for dingoes from Fraser Island and elsewhere.

The coat colour of Australian dingoes is typically ginger but varies from sandy-yellow to red-ginger and is occasionally black and tan, white or black. On Fraser Island most dingoes are a golden sandy colour. Many Fraser Island dingoes are born with black hair and markings on the back and tail which tends to fade with age to the typical sandy colour.

Most dingoes have white markings on their paws (described as socks), tail tips and chest, some have black muzzles and all have pricked ears and bushy tails. White socks are different for individual animals and along with white tail tips are a key identification element used when monitoring dingoes. These features, as well as fighting scars, are unique to each individual dingo. Dingoes have pups only once per year.

How many pups does a dingo have?

Most female dingoes become sexually mature at two years but can have pups in their first breeding season. Unlike domestic dogs, dingoes only have pups once per year.

Usually only the dominant pair of each pack will successfully breed and raise pups. Dens are very carefully guarded and well hidden. The other pack members help to rear the pups. The social system within packs means that not all pups can survive to adulthood. Usually only two to three pups will survive to the next breeding season. Generally pups usually become independent at 3–4 months of age, or if in a pack, when the next breeding season begins.

When do the dingoes have pups?

March to May is mating season

Mating time is a time for testing dominance, protecting territories and expelling invaders from other packs. It is a trying time for dingoes, especially males. Adults compete to mate and will fight to protect their territory—to the death if necessary. Some dingoes may also try to dominate humans by snarling, nipping or biting.

This is a dangerous time for submissive, young animals or animals roaming outside of their territories. Fights regularly occur and can involve two or more dingoes at a time. Most know to submit to the dominant dingo, with the matter generally settled with a bite—the loser then running away. Some serious wounds can cause long-lasting injuries, lameness or even death. This is a natural habit of all pack animals.

June to August is feeding time for newborn pups

Once new born pups arrive, their mothers may be aggressive. They need to find food for themselves and their pups. Alpha mothers are very domineering during this stage, even killing another mother’s pups if she has mated with one of the pack. It’s all about survival of the strongest and the alpha pair want their pups to survive.

September to November is when pups are learning to hunt

September to November is when pups are learning to hunt. If food from humans is available, pups may not learn natural hunting skills. Adult dingoes may regard humans as competitors for that food and become aggressive. Dingoes live in packs and have distinct male and female hierarchies.

How many dingoes in a pack?

Although dingoes are often seen alone, most belong to socially integrated packs whose members meet every few days or coalesce during the breeding season to mate and rear pups. At such times, scent marking and howling is most pronounced. In areas where dingoes are not disturbed by human control operations, discrete and stable packs of 3–12 dingoes occupy territories throughout the year. Such packs have distinct male and female hierarchies where rank order is largely determined and maintained by aggressive behaviour especially within the male ranks.

Dingoes live in packs characterised by a male dominance hierarchy throughout the year and a secondary female hierarchy during the breeding season. Essentially there are dominant animals, subordinate animals and scapegoats at the bottom of the hierarchy. A consequence of this social system is that not all dingoes have equal access to food and other resources, because dominant animals frequently deny access to subordinates, even in the presence of abundant food supplies (Corbett, L 1995, The Dingo in Australia and Asia, UNSW Press, Sydney).

It is illegal to disturb or feed wongari (dingo), which includes attracting them with food or food waste. On K’gari (Fraser Island) an increased maximum fine of $11,028 and an on-the-spot fine of $2,205 now apply to those people who break the law. Be dingo-safe.