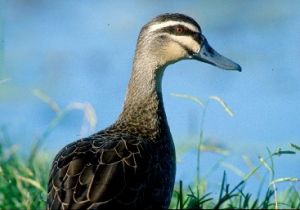 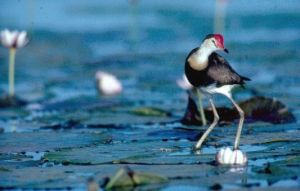 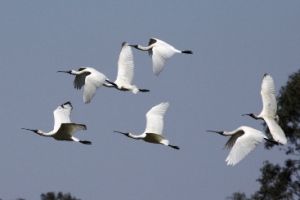 In this wetland, a lagoon is formed when wet season rains are trapped in a naturally occurring ‘basin’ adjacent to Meldrum Creek in the Annan River catchment. Low-lying parts of the woodland are sometimes inundated. Many waterbirds feed and breed here, and many more move out to nearby wetlands, temporarily replenished by the rains, where there is less competition for food and nesting sites.

With the onset of the dry season, nearby wetlands dry out completely and this lagoon shrinks into a series of permanent waterholes that teem with life. At this time, Keatings Lagoon becomes an oasis for many species of waterbirds. They migrate here to feast on the rich aquatic smorgasbord of the permanent waterholes—crustaceans, plankton, insect larvae, bugs, beetles, flies and dragonflies. However, in some years, the waterholes dry out altogether and few birds appear.

In most years, a variety of water birds can be seen viewed feeding and roosting in the lagoon. Pacific black ducks Anas superciliosa ‘duck-dive’ to filter food from the water in the shallows. Black-necked storks Ephippiorhynchus asiaticus stride through the shallows, jabbing at prey with their bills. Australasian darters Anhinga novaehollandiae and little black cormorants Phalacrocorax sulcirostris dive for their prey. Royal spoonbills Platalea regia sweep their bills through shallow water, locating food with the sensitive top of the bill. Black-winged stilts Himantopus himantopus and sharp-tailed sandpipers Calidris acuminata probe in water and mud with their long, sharp bills. Comb-crested jacanas Irediparra gallinacea trot over large lily pads, bobbing their heads up and down to peer under the edges of the leaves for insects and seeds. Brahminy kites Haliastur indus glide slowly above the lagoon, ready to swoop down onto their prey.

Plants in and around the lagoon also provide food, shelter and nest sites. The leaves and flowers of the giant waterlilies Nymphaea gigantea float on the water’s surface, forming perfect platforms for comb-crested jacanas which roost and build nests on the floating lily pads.

Grasses, legumes, herbs, water lilies and sedges are foraged by ducks and geese. Trees fringing the lagoon such as broad-leaved tea-trees Melaleuca leucadendron, with their characteristic weeping branches, produce clusters of fragrant flowers that attract woodland birds such as the brown honeyeater Lichmera indistincta.

The surrounding woodland is dominated by eucalypts, Cooktown ironwood Erythrophleum chlorostachys and foambark Jagera pseudorhus with an understorey of lady apple Syzygium suborbiculare, screw palm Pandanus spiralis and sandpaper fig Ficus opposita. Many of these plants have traditional Aboriginal uses.

Freshwater fishes such as rainbowfish Melanotaenia spp., sevenspot archerfish Toxotes chatareus and sooty grunter Hephaestus fuliginosus live in the lagoon. During the wet season, juveniles of the highly sought-after fish, barramundi Lates calcarifera, move into the lagoon to feed on small crustaceans and plankton. Adult barramundi also may live in the lagoon for several years before returning downstream during the wet season to spawn.

Mulbabidgee is a special place for the Waymbuurr clan of the Guuggu Yimidhirr Aboriginal people who have used this area for thousands of years, collecting a variety of animals and plants for food, medicines and raw materials.

Many of the plants in this area have traditional uses. The information below is provided by the Gungarde Aboriginal Corporation.

The hard timber from Cooktown ironwood Erythrophleum cholrostachys is used to make shields and spear tips. The roots also produce a tar like substance that can be used as an adhesive.

The bark from paperbark trees Melaleuca spp. is used to make watertight carrying baskets or ‘coolamons’.

The semi-parasitic native cherry Exocarpus latifolius produces small tasty orange-coloured fruit. The wood and leaves are used as a mosquito repellent and the wood is made into yam sticks.

Small nutritious seeds from inside the kernels of the screw pandanus Pandanus spiralis are eaten when ripe, and the leaves are used for weaving baskets.

The leaves of the soap tree Alphitonia excelsa are used for treating sores, aches and pains, and along with the fruit, are crushed to make a fish poison.

Stems of the whip vine Flagellaria indica can be used to make canoes, baskets, and fish traps. An infusion, produced through crushing the inner stems and growing tips, is also a treatment for sore teeth, eyes, and throats.

Yams Dioscorea spp. were important staple foods of the Waymbuurr people. The yam plant is actually a vine with an underground tuber which grows during the wet season. In the dry season, the vine dies off, a signal that the tuber is mature and ready to dig.

Weaver ants Oecophylla sp. construct nests by gluing together green leaves, using a secretion squeezed from the bodies of their pupae. A ‘medicine’ drink is made by squeezing and mixing handfuls of ants and their eggs with water.