The forest type in Jumrum Creek Conservation Park is mesophyll vine forest, a dense rainforest dominated by large-leaved plants. Some of the large trees include Kuranda quandong Eleocarpis bancroftii, yellow walnut Beilschmiedia bancroftii and rose butternut Blepharocarya involucrigera. Epiphytes, such as the basket fern Drynaria rigidula can be seen in the canopy.

Of particular note in this park are the climbing palms Calamus spp, with common names like lawyer vine, wait-a-while and hairy mary. These plants produce whip-like structures with sharp hooks that catch onto other plants, enabling the palms to climb to the sunlight. If these hooks catch onto the clothing or skin of walkers, it is best to 'wait-a-while' in order to unhook the plant—pulling against the hooks will result in scratches. The fruit of the various species are eaten by pigeons, doves and cassowaries. 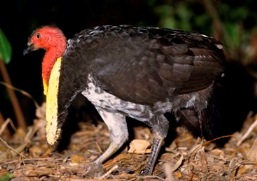 Two mound-building birds are found in the conservation park—the Australian brush-turkey Alectura lathami and the orange-footed scrubfowl Megapodius reinwardt. These birds are members of the megapode or 'big foot' family and are named for the strong, thick feet and legs they use to scratch up large mounds of leaves and soil. Eggs are laid deep in the mound, where the decomposition of leaf matter provides the heat needed for incubation. After hatching, chicks dig their way out and fend for themselves.

The Djabugay people are the Aboriginal Traditional Owners of Jumrum Creek Conservation Park and they have a strong connection to their rainforest country around Kuranda. Jumrum Creek is an important place where young people are taught Djabugay stories, culture and language.

The wait-a-while plants Calamus spp., so prominent in the conservation park, have been used extensively by the Djabugay. Young leaves, seeds and fruit were eaten and were also used as pain killers. The strong vines were made into hut frames, which were then covered with the leaves and fronds of the plant. The Djabugay people also used the vines to bind axe handles and to make fish traps and dilly bags.

When the walking track in the conservation park was upgraded by the local council, Djabugay people worked on the project, gaining building skills and a strong sense of healing of their country. The boardwalks and graded path greatly improved access over several swampy, low-lying areas. The project resonated strongly with the Djabugay belief that visitors should 'walk one track'. This means many things—not only that visitors should stay on the walking track, but that they should have respect for the land. The Djabugay ask that you 'walk one track'—take only photographs and leave behind footprints but no rubbish.

Find out more about the culture and country of the Djabugay community.