More than 130 million years ago this area was a shallow sea. Sand and mud were washed down rivers and consolidated under great pressure to form beds of sandstone rock. These beds were later uplifted. Millions of years of weathering and erosion have shaped these relatively flat or gently inclined layers of rock to create today's landscape.

The Jardine River dominates this landscape and flows all year round. The continual flow of water is largely due to the shallow sandstone bedrock below the ground's surface. This porous rock acts like a sponge, restricting water loss and storing large volumes of water. The water is slowly released, via springs through the ground, to feed streams and rivers. The high annual rainfall (over 1500mm) also contributes to the Jardine's continual flow. Unlike other northern tropical rivers, which are subject to seasonal rainfall patterns, the Jardine catchment experiences rain all year round, even during the dry season.

The landscape of the Jardine catchment is predominately flat with broad to gently undulating ridges, incised valleys and broad coastal valleys and plains. A feature of the catchment is the abundance of water that can either be seen seeping through, or lying close to the ground's surface, even near the highest points of the landscape, below the crests of broad ridges.

In the upper catchment, broad, low ridges alternate with narrow valleys, with as little as 15m between the crest of the ridge and the valley floor. Water collects in the valleys forming numerous spring-fed streams, such as Canal Creek, which feeds into Eliot Creek and other tributaries of the Jardine. These tributaries have incised deep courses into the landscape, particularly in the shallow valleys.

In the lower catchment, streams flow more slowly through broad valleys, depositing sand derived from the weathered ridges of the upper catchment. The sand-choked tributaries form a complex floodplain and delta.

The Great Dividing Range is the slightly elevated spine of the cape, forming a prominent, low escarpment in the southern part of the catchment. Although it reaches only a maximum elevation of 164m, the range creates a dividing watershed that forces streams to flow either west into the Gulf of Carpentaria or east into the Coral Sea (Pacific Ocean).

The coastal plain covers the area below the dividing range and contains sand deposits formed by the erosion of sandstone from higher land and from wind-blown beach sand. Water is abundant and runs across the beach for most of the year, in the form of streams and water seepages.

The Jardine catchment contains one of the largest stands of cypress pines in northern Australia. 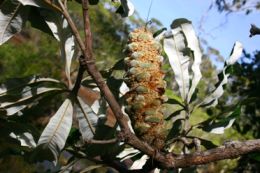 Banksias flourish in the dry heath community on the creek banks. 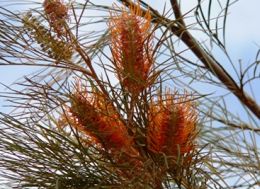 The distribution of the various plant communities is influenced by the depth of groundwater, changes in soil fertility, fire history and aspect. There is often a dramatic transition from one community to the next, the sharpest transitions occurring between rainforest and open forest, and dry heath to wet heath or permanent swamps.

Rainforests grow in pockets on the sheltered areas near ridge tops or at the base of the escarpment. They grow on the best soil in high rainfall areas; the abundance of spring water from the escarpment creates favourable conditions. Rainforest can also occur on swampy and dry ground but not where the ground is wet for extended periods.

Woodlands, widespread from the tip of Cape York Peninsula to the southern end of the McIlwraith Range, are typically dominated by eucalypts with bloodwoods in the canopy and smaller shrubs and trees in the understorey.

Dry heaths, also widespread, are generally found on well-drained soils in the western upper catchment as well as on the dunes. They are richer in species than wet heaths and dominated by Neofabricia myrtifolia and grevilleas, such as Grevillea pteridifolia.

Wet heaths are commonly found on wet soils of the slopes and along narrow drainage lines and swamps in the lower catchment. They merge into permanent swamps with sedge swamps at the lowest points. 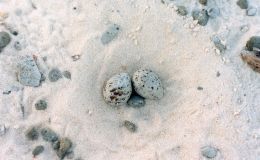 At Captain Billy Landing look for shorebirds like the little tern Sterna albifrons that breed on the beaches near the camping area. Little terns are endangered because of disturbance by feral animals, vehicles and beachgoers intruding on nest sites. Stay clear of any nesting seabirds. Chicks and eggs are easily destroyed by heat, cold and predators if left unprotected.

Many reptiles are found in the area. Spiny knob-tailed geckos Nephrurus asper inhabit woodlands and saw-shelled turtles Wollumbinia latisternum live in the creeks—hiding during the day as the clear water offers little protection from predators. The elusive Jardine River turtle Emydura subglobosa subglobosa, known for a spectacular yellow strip across the face and red patches on the neck, has also been found in the Jardine River. Dangerous estuarine crocodiles Crocodylus porosus live in the waterways, along the coast and in offshore waters of the park and reserves.

Various fish, such as rainbowfish Melanotaenia spp., archerfish Toxotes sp., northern saratogas Scleropages jardinii and barred grunters Amniataba percoides, live in the creeks and tributaries of the Jardine River. The distinctive colours of rainbowfish vary according to species and locality. For thousands of years, northern Cape York Peninsula has been home to Aboriginal people. They were seafarers who spent their lives in and out of outrigger canoes, gathering food and other resources from the seas and ‘sandbeach country’. The Aboriginal people of the country now protected as Jardine River National Park, Heathlands Resources Reserve and Jardine River Resources Reserve belong to several different language and social groups—the Atambaya, Angkamuthi, Yadhaykenu, Gudang and Wuthathi peoples. The groups were variously connected through language, marriage ties and trade; as warriors, they were constantly redrawing their boundaries through inter-tribal wars and alliances.

The arrival of European settlers in 1864, brought about great change for the ‘sandbeach’ people. Within 30 years, their population of 3000 was reduced to about 100 people. Language and tribal groupings broke down and were rearranged as previously hostile groups banded together in order to survive. Some groups offered great resistance to the settlers, becoming known as the ‘bad blacks’. Today the Aboriginal Traditional Owners of the area—descendants of great seafaring warriors—have survived enormous change yet retain a strong cultural identity and connection to their country.

In 1770, Lieutenant James Cook put ‘York Cape’ on the world map but it was not until 1848, that Edmund Kennedy led the first overland expedition to Cape York Peninsula.

Departing from Rockingham Bay (near Mission Beach), his party missed a rendezvous with a supply ship at Princess Charlotte Bay and, struggling northwards, left behind eight men at Weymouth Bay and a further four men at Shelburne Bay. Kennedy was speared and killed in an encounter with a local Aboriginal group near the Escape River (Mu Kooringe), almost in sight of his destination. The last member of the party, Jacky Jacky, a young Aboriginal man, completed the journey alone—one of only three survivors of this gruelling expedition.

Somerset, near the northern tip of the cape, was established as a government outpost in 1864, with John Jardine as Police Magistrate. In 1865, his sons Frank and Alexander, encountered great difficulties in herding cattle and horses from Rockhampton along western Cape York Peninsula to Somerset. Frank Jardine established the family's cattle station and later became Police Magistrate, until government functions were transferred to Thursday Island in 1879. He lived out his life at Somerset, ‘a law unto himself’, terrorising local Aboriginal people and earning notoriety as ‘Devil Man’. Little remains of the settlement today. Despite representing the great disruption to Aboriginal people's lives, Somerset has great spiritual significance and is seen as a symbol of their cultural survival.

In 1879–1880, the third attempt at overland exploration of Cape York Peninsula was a success. Government geologist Dr Robert Logan Jack and his party searched for new goldfields and, although they did not find any, their meticulous reporting of the terrain encouraged the government to proceed with plans for an overland telegraph line. During their journey, Dr Jack and his party met a group of Aboriginal people on the coast near the place known today as Captain Billy Landing. One Aboriginal man, called Captain Billy, spoke English well and proposed bartering fish and turtle for flour, tobacco, clothes and money. Dr Jack declined, as his stores were needed for the long journey ahead. Captain Billy guided them down to the coast to the mouth of a creek, which Dr Jack named after Captain Billy. The expedition party continued on their way but were followed throughout the day by small groups of Aboriginal men armed with spears. As they appeared increasingly hostile, Dr Jack's men fired to scare them away. Later that night, while camped at Camisade Creek, the expedition party was attacked. They escaped serious injury and, after burning the spears embedded in their tents, continued on their journey north.

In 1883, Post and Telegraph Department officer, John Bradford, led the fourth expedition of the cape to survey a route for the overland telegraph line. Setting out from Cooktown, this expedition followed the old Palmer River gold rush trail past Laura and then struck north, avoiding dense scrub and ground with potential to flood. Despite their difficulties they reached Somerset in 82 days. The telegraph line, completed in 1887, comprised a series of repeater stations and an underwater cable link to Thursday Island. The line linked Cape York Peninsula with Brisbane, allowing communication by Morse code. Each telegraph station employed two or three linesmen to continuously patrol the line. They cleared undergrowth and repaired damage, camping in linesmen's huts along the way. The telegraph line, which was in operation for 100 years until 1987, opened the way for settlement and development of the cape.

The challenge of crossing the treacherous landscape of the peninsula continued. In 1918, Francis Birtles, the ‘Adventurous Overlander’, rode a bicycle to the tip of Cape York Peninsula through 960km of 'rough mountains and jungle scrubs’.

The first car reached the top of Cape York Peninsula in 1928. The baby Austin Seven followed the telegraph line and, in places, was dragged across swollen rivers, lashed to a raft. ‘The clutch was a little worn and the brakes and the steering gear, we saw, would not be hurt by attention,’ one of the drivers later wrote.