The freckled monitor Varanus tristis is one of many reptiles found in Isla Gorge National Park. 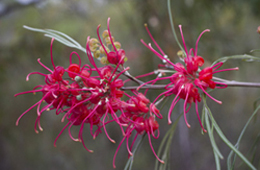 Flowering grevilleas provide splashes of red throughout the park. Wedge-tailed eagles can be seen from the lookout, often soaring high above the park.

Isla Gorge is set within a geographic region known as the Central Queensland Sandstone Belt. This rugged, elevated landscape covers an area of approximately 82,000km2. At least 25 mountain ranges radiate from the Great Dividing Range in this region, in some places rising to over 1000m above sea-level, earning this area its other nickname—the 'Roof of Queensland'.

This wild landscape is the result of a long and turbulent geological history. The sandstones of this region were created from vast sheets of sand deposited on river plains in the Jurassic Period, about 190 million years ago. After millions of years of uplift and erosion, the sandstones remain today as cliffs, gorges and valleys. In some places, basalt from volcanoes caps the sandstone ridges.

The gorges of Isla Gorge National Park have been created from the erosion of colourful Precipice Sandstone by the tributaries of Gorge Creek, which eventually drains into the Dawson River. The upper part of the sandstone, such as at the Isla Gorge lookout, is made of thin beds of white, very fine-grained sandstone and siltstone but, lower down, there is more typical yellowish, course-grained, cross-bedded sandstone in thick beds.

A rich diversity of life

The national parks of this area are located within a biological region (bioregion) known as the Southern Brigalow Belt. Named after brigalow Acacia harpophylla, a plant that once covered much of this area, this bioregion comprises a complex mosaic of different vegetation communities. In the Central Highlands area, plant communities of the arid inlands (dominated by acacias such as mulga or brigalow) mix with plant communities of the more humid regions (dominated by eucalypts). Remnants of dry rainforest (softwood scrub) and natural grasslands are also found throughout the area.

Many of the plant communities of the Southern Brigalow Belt are classed as 'threatened' due to clearing, altered fire regimes and the effects of introduced species. As only just 2 percent of this bioregion is conserved within national parks and other protected areas, parks such as this one play a key role in conserving examples of the area's original vegetation communities. Isla Gorge National Park conserves 9 regional ecosystems of the Southern Brigalow Belt—3 of which are classed as 'endangered'.

Eucalypt forests of yellow bloodwood and narrow-leaved ironbark dominate the park; while patches of brigalow scrub and dry rainforest (softwood scrub) are also found throughout. Woodlands of poplar box are found on the alluvial plains.

These plant communities provide habitat for a large range of animal species within Isla Gorge. Fifteen of these fauna species are classed as either rare or threatened.

Isla Gorge is home to many types of birds. Honeyeaters include spiny-cheeked, brown, white-eared and blue-faced, when eucalypts, wattles, grevilleas and boronias are in flower from mid-winter to summer. Wedge-tailed eagles sour high above the gorges and peregrine falcons leave secluded roosts on cliff faces to hunt. Two species, the varied triller and the emerald dove, are found only within the park's softwood scrub. The squatter pigeon can also be seen along the edges of tracks and roads in this area.

A diverse collection of reptile species are found within Isla Gorge, including the frilled lizard, the brigalow scaly-foot, the golden-tailed gecko, the Capricorn worm-skink and a number of gecko species. Mammals such as the Herbert's rock-wallaby, the common wallaroo, the sugar glider and the fawn-footed melomys, as well as a diverse range of insectivorous bat species, have been recorded within the park.

Parts of the Flagstaff Road still exists over 155 years after it was built. A road gang on the Maryborough to Biggenden Road. Date unknown. Wool teamsters with a loaded wagon of wool bales on the road to port, 1869.

The main section of Isla Gorge falls within the traditional lands of the Wulli Wulli People. Rock engravings and stencil images on sandstone walls are a reminder of the traditional owners’ long association with this land.

In 1844, explorer Ludwig Leichhardt travelled through this area on his way from the Darling Downs to Port Essington near Darwin in the Northern Territory. Leichhardt named many features after expedition members and supporters.

With the arrival of settlers soon after, decades of conflict began as the traditional owners strove to keep their lands from the new arrivals. However, by 1920, the conflict and European diseases had taken their toll and remaining Aboriginal people were forcibly removed to distant 'reserves'.

In 2015, a significant milestone in the area’s history occurred with the Wulli Wulli People recognised, through the Native Title process, as the traditional custodians of most of the land within Isla Gorge National Park and the surrounding area.

The north-western tip of Isla Gorge National Park conserves the remains of a hand-paved road. Travelling between Roma and the port of Rockhampton, bullock teams and their heavy wagons once used this steep and winding road to negotiate the Dawson Range. The wagons carried wool to the port and supplies back to Roma and further west.

The Flagstaff Road, as it was known, was in use by 1860—less than 15 years after white settlement in the area. H. C. Gregory was contracted in that year, for the sum of £200, to build sections of the Palm Tree Creek to Flagstone Road—including the paving of this section of road. While the steepest section of the road was approximately 500m long, about 150m was surfaced (or flagged) with hand-hewn stones.

The paving was completed by a team of 6 men after 6 months work in 1863. Rocks, some weighing approximately 200kg, were brought in from nearby areas and used in the flagging. The stones were cut and set into the ground with care so that the edges fitted neatly together. Flagged drains were created at various intervals along the road to drain storm water. The men also had to make a cutting through rock to ease the incline, and the road also had to be widened.

Traffic on the Flagstaff Road declined in the early 1930s. A new road between Taroom and Theodore had opened, and the new toll road at Toowoomba allowed wool to be transported to the Brisbane port.