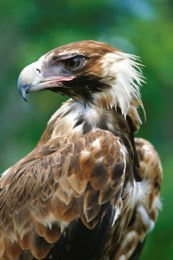 Dry woodlands, wet and dry sclerophyll forests, upland rainforest and wetlands provide for a large range of birds within a relatively small area of the Atherton Tableland. These diverse habitats support more than 300 species of birds, 12 of which are endemic to the Wet Tropics World Heritage Area.

Hasties Swamp National Park protects a wetland refuge and is renowned for its diverse populations of local and migratory birds. The seasonal changes in the wetland are the major contributor to the diversity of wildlife in the park. Variations in the water level influence the type and quantity of habitat, which in turn attracts different animals. More than 220 bird species have been recorded in the park, mainly in the wetland and surrounding woodland.

International visitors to Hasties Swamp include common sandpipers Actitis hypoleucos and Latham's snipes Gallinago hardwickii, which stop over around August and September on their way from Japan to southern Australia to escape the northern hemisphere winter. They return again in March through to April to rest and feed on their way back to Japan. The sharp-tailed sandpiper Calidris acuminata also arrives at Hasties Swamp around August and September—escaping the severe winter in arctic Siberia. During this time they are common in wetlands throughout Australia, returning to Sibera in March. From New Guinea, summer migrants like rainbow bee-eaters Merops ornatus, common koels Eudynamys scolopacea and channel-billed cuckoos Scythrops novaehollandiae visit the swamp.

Hasties Swamp is located on the transition zone between the rainforest, which once covered land to the east of the park, and the dry sclerophyll woodland which persists on the lower slopes of the Great Dividing and Herberton ranges, immediately to the south and west of the park.

Hasties Swamp lies in a depression between the older granites of the Great Dividing Range on the west, the Herberton Range to the south and the western margin of the more recent Atherton basalt flows to the east. It is part of the Scrubby Creek system which drains into the Barron River catchment. The swamp's location, on the western edge of the basalt soils, indicates it may have formed when lava flows impeded the flow of Scrubby Creek.

Deeply weathered, highly permeable basalt soils underlie the 5–30 cm layer of a relatively impermeable base of clay and peat-like material, formed over time by rotting vegetation. In places this has been overlaid by up to 20 cm of more recent, decaying vegetation which acts like a giant sponge, retaining water during the drier months. Records indicate that Hasties Swamp has completely dried out only a few times during the last 100 years. Many aquatic plants are rooted in this 'sponge' layer.

The Yidinji people know Hasties Swamp as 'Nyleta' which means 'where the waters meet'. Nyleta was a seasonal camp and the Yidinji people followed strict laws regarding the collection of plants and hunting of animals.

In the 1880s the Hasties Swamp area was established as an important camping and watering point for bullock and horse teams working between the coast and the newly-established tin mines in Herberton. The permanent water and pasture on the western side of the swamp meant it was an attractive stop over for the teamsters, and a stockyard was built at the southern end.

The swamp was set aside as a permanent reserve for travelling stock in the 1890s and, over the following years, various applications to convert the land to leasehold or freehold were rejected.

By the 1970s the wetland habitat importance of the area was starting to be recognised and applications were made to the government to set aside the area for conservation. On 5 April 1980, 47.8 ha of the swamp were declared national park, extended to 56.6 ha on 21 June 1986.

The 56.6 ha are part of a greater catchment of 360 ha which includes forest, agricultural land and urban property. These types of land use usually draw large quantities of water from the catchment, reducing water available in the swamp. To counter the effects on water levels caused by this development, QPWS built a low earth weir at the main outflow to retain water within the swamp system.