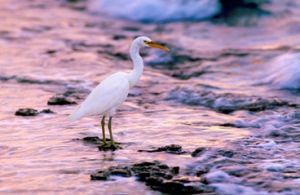 Green Island is a 12ha coral cay on a mid-shelf reef within the Great Barrier Reef. For the past 6000 years, winds, waves and currents have swept reef debris onto the sheltered side of the reef, creating an unstable sand bank. Seeds were washed ashore or were brought by birds. Plants sprouted and birds began to nest. Plant matter and bird droppings helped to stabilise and enrich the sand. Soils developed, allowing a range of plants to grow. Loose sand was cemented into cay sandstone and beach rock, protecting the new cay from erosion. Rainwater collected below the surface of the soil, forming a shallow layer of fresh water floating on top of a denser layer of salt water. This fresh water created a permanent water supply to nourish the island's plants. Birds deposited seeds from mainland forests and a closed vine forest developed. Today, Green Island rises from the surrounding reef platform in a gentle dome and, like all cays, continues to change—from dramatic erosion by storms to a gentle reshaping with each tide.

Green Island has some of the most diverse plant life of all the coral cays in the Great Barrier Reef Marine Park. Green Island supports a closed vine forest typical of that found on forested coral cays on inshore reefs north of Cairns. The canopy reaches almost 25m high in places.

During the latter part of the 19th century, much of the forest was cut down to fuel the smoke houses of beche-de-mer (sea cucumber) fishermen. Green Island was nothing but ‘an ugly tangle of shoulder-high burrs’. The forest you see today has regrown since that time.

Today 134 species of plants have been identified on the island—trees, palms, shrubs, scramblers, vines, herbaceous creepers, grasses and herbs. The complexity of the vegetation is due to birds, most importantly pied imperial-pigeons, which regularly transport seeds and nutrients from the mainland—enriching species diversity.

Seagrass meadows are widespread over much of the reef flat, with the most prominent beds occurring on the inshore flat, north and north-west of the island. Seagrasses are important feeding grounds for turtles, dugong, shrimps and commercially important penaeid prawns.

Green Island is home to 35 species of seabirds and 28 species of forest birds. You may see ospreys, sea eagles, egrets and terns near the shore. On the island, look for buff-banded rails, emerald doves, rose-crowned fruit-doves, silvereyes, white-breasted woodswallows and pheasant coucals. Pied imperial-pigeons roost on the island in summer during their annual migration from New Guinea for the forest fruiting season. The vulnerable beach stone-curlew also visits the island. Several species of skinks and geckos can be seen or heard in the undergrowth. Butterflies are numerous and a small colony of spectacled flying-foxes roosts in the forest.

Green Island sits upon a platform reef of about 710ha. Fragile branching corals such as staghorn and plate corals and many soft corals grow in the sheltered lagoon area on the western side of the reef. Robust corals such as boulder corals and mushroom corals survive on the more exposed eastern edge. Many invertebrates can be found on the reef including molluscs (e.g. giant clams, spider shells and cone shells), echinoderms (e.g. sea urchins, sea stars and beche-de-mer), and crustaceans (e.g. crabs and shrimps). The reef has been affected by two major crown-of-thorns starfish outbreaks. Soft corals are not preyed upon by the starfish and are more predominant around Green Island. Regrowth of hard corals can also be seen. Many species of fish inhabit the shallow waters surrounding the island. Green and hawksbill turtles and dugong—all with a conservation status of vulnerable—use the surrounding reef and seagrass meadows as feeding grounds throughout the year.

Wunyami (Green Island and surrounding reef) is within the sea country of the Guru-Gulu Gungandji Aboriginal people and holds traditional and contemporary cultural significance for them. They have lived in this area for thousands of years. In times of lower sea levels, the Gungandji hunted and gathered on the grassy plains of ancient reef formations, right out to the edge of the present-day barrier reef. Then, when sea levels rose and Green Island reef had developed, they paddled to the island in canoes for hunting and ceremonies. Today, the Guru-Gulu Gungandji retain a strong spiritual connection with their country and have an active voice in managing the island.

The Guru-Gulu Gungandji share an understanding of their land and sea country. This cultural knowledge includes the creation of all things, how to find food, and peoples' relationships with the country and with all living things. It is passed on to younger generations through art, music, dance and stories. In the past, ceremonies were also an important way to teach about culture—Wunyami (place of spirits) was a place of initiation ceremonies where young boys became men. Today the Traditional Owners hope to revive initiation ceremonies to help keep their culture alive. Green Island reef is still an important hunting and fishing place. Through these continuing uses of the area and its resources, the Guru-Gulu Gungandji people maintain their obligations that arise from traditional lore, kinship and totems.

The Guru-Gulu Gungandji children all learn stories about Wunyami, Green Island. One story concerns a turtle and a crab:

A small turtle joined a group of other turtles gathering at the creek edge but he could not reach the fresh water. Desperately thirsty, he found a puddle of rainwater and started to drink when suddenly he let out a loud scream. A large mudcrab was pinching the end of his nose with its pincers. The little turtle pulled away and the crab fell off. The turtle was left with two small nostrils at the end of his nose. In time, the other turtles noticed that he became big and strong, so they asked the spirits to give them nostrils too.

While exploring Australia's east coast in 1770, Lieutenant James Cook recorded on his chart ‘a low green woody island…’ naming the island after his ship's astronomer, Mr Charles Green. Although other European explorers passed by during the early part of the 19th century, including Captain P.P. King in 1819 and Stanley and MacGillivray in 1848, each adding more detail to charts of the reef and coast, Green Island was not settled by non-Indigenous people until the mid-1800s.

In 1857, the first of many beche-de-mer fishing stations was established on the island. The work was demanding, conditions harsh and the island took on a frontier-like atmosphere as vegetation was cut down, huts erected and birds and fish were hunted. The industry continued until the early 1900s by which time numbers of beche-de-mer had declined. The settlement of the port of Cairns in 1876 meant increased shipping in the area. There were so many ships wrecked on the reefs around Green Island that, in 1889, coconuts were planted to provide food for marooned sailors.

At the same time, Green Island was becoming a popular picnic destination for Cairns residents. In 1906, the local newspaper predicted:

In time (Green Island) will prove to be the popular resort of the whole district. Hotels will be erected and steamers will ply daily between the island and Cairns.

In 1928, the first regular ferry service began, with a wooden jetty built several years later. In 1938, the first resort was built.

From the late 1940s, international tourism began to develop. Green Island boasts several world-first tourism innovations—glass-bottomed coral viewing boats invented by Blake Hayles in the early 1930s, the Underwater Observatory built by Vince Vlasoff and Lloyd Grigg which opened in 1954, and Noel Monkman's pioneering underwater films shown daily in the Great Barrier Reef Theatre on Green Island from 1961 until 1992. Another tourist attraction, Marineland Melanesia, opened in 1961 and in 1963, the Hayles company opened the Coral Cay Hotel which was enjoyed by many visitors, both local and international, until 1994 when the present resort was built.

Today's resort, which offers facilities for day visitors as well as luxury overnight accommodation, is a far cry from the early days of tourism on the island, although the main attraction—a tiny forested cay surrounded by coral reef—remains the same. Today,Green Island draws more than 300,000 people each year from all over the world. Due to this high level of visitation Green Island is important to the regional economic base and is a significant recreation and tourism destination in the region.