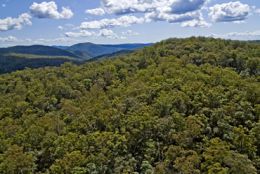 The wild ranges of the Conondales have a turbulent geological past. Phyllite is a distinctive rock seen near Artists Cascades. The rock's colour comes from traces of iron and manganese oxide, while its silver sheen is created by small shiny flakes of mica. Weathered stones create a colourful bed below the clear waters of Booloumba Creek. 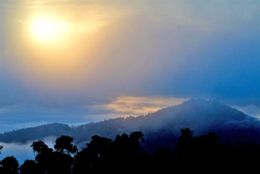 The Conondales also have a long human history. This is the land of the Kabi Kabi people. Forest trees, such as this tallowwood (Eucalyptus microcorys), sustained a timber industry for generations. 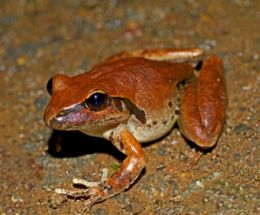 The varied habitats of the Conondales are home to a wide diversity of fauna. Eastern stony creek frog (Litoria wilcoxii). Hyacincth orchid (Dipodium sp.), one of many orchids that can be found in Conondale National Park.

Geology tells us much about the history of this area. The Conondale Range was once a very different environment to what it is today, having its origins in the deep ocean.

The Great Walk traverses ancient crumpled and disrupted metamorphic rocks. These were once muds and dirty sands deposited in a deep ocean trench off the eastern edge of the Gondwanaland continent. They date back to the Devonian and Carboniferous period—370 to 320 million years ago.

Basalt lavas were erupted among the deposited sediments, and patches of silica-rich ooze accumulated from the skeletons of microscopic marine organisms called radiolaria. At the time, only simple woody plants had evolved on land and amphibian animals were just struggling ashore. In the deep trench, life was sparse and few fossils were preserved.

Around 315 million years ago, changing movements of tectonic plates affected the sediments by compressing, hardening, and standing them on end; most likely uplifting them to mountainous country. The movements sliced them into discontinuous, steeply inclined bands trending north-west.

Pressure and heat changed the mudstone to phyllite, basalt to greenstone, and siliceous ooze to quartzite. New minerals crystallised in layers at right angles to the pressure, and distinctive layering called ‘foliation’ developed. This can be seen in the rocks along the track, usually inclined at steep angles.

Millions of years of erosion gradually lowered the mountainous block, possibly creating a plateau surface. Streams falling off the sides of a plateau would have been forced to cut across the north-westerly ‘grain’ of the rocks, forming the gorges and creeks we see here today.

Unlike many areas the plant communities in the Conondale Range show a closer association with aspect and topography than soil composition. This is because the different rocks are closely interspersed causing the soils derived from them to vary greatly over short distances.

Intimately connected to this land

Culturally significant sites throughout this area demonstrate continual use of this land over thousands of years by Indigenous Australians.

Living a traditional lifestyle, Kabi Kabi families journeyed through this area, staying for varying periods of time in one place depending on seasonal resources available. As they journeyed, reliable water sources were important in determining camp locations. Natural resources were plentiful and families were self-sufficient.

Their traditional lifestyle changed forever with the arrival of Europeans. Indigenous Australians were psychologically and physically unprepared for confrontation with this new culture that viewed land as a commodity that could be bought, sold and stolen.

White people often followed Indigenous pathways and the settlements they established along the way cut off traditional food sources, resources and sacred places for Indigenous people.

In 1842 Governor Gipps proclaimed a large reserve to protect bunya pines because of their importance for Aboriginal people. It was illegal to settle or clear land in the reserve.

The bonyee (bunya pine’s) large nut crops were at times an important food source. When the nut crop peaked every three years, many invited guests travelled great distances from coastal and inland areas to share food, songs and dances, arrange marriages, and socialise.

In 1860 the Parliament of the new Queensland colony rescinded the reserve status allowing the influx of Europeans to begin, with many arriving in the 1890s. Many people were forced to move from their traditional land to Aboriginal Reserves. Some stayed, found occasional work and adapted to a new lifestyle.

Today, their descendants maintain strong cultural links with the land and strive to share their knowledge and culture to help protect this region. Kabi Kabi people have been involved in the development of this Great Walk and its cultural visitor information.

In 1860 the reserve status of forests protected since 1842 was rescinded and clearing for cattle and crops began.

1907 marked a turning point for the Conondale Range when State forest reserves were progressively declared in the area. The logging of old growth forests was superseded by the native pine plantation industry that continues to provide quality timber resources.

In the 1970s the Conondale Range Committee formed in response to growing concerns about the logging of undisturbed catchments and the effects on rare and endangered species.

Much of the environment you see along the Great Walk has a connection to the logging period. This area is protected today thanks to the dedication of those committed to the conservation of Conondale Range.

The 35,720 hectare Conondale National Park protects many natural values including Bundaroo Creek catchment. Virtually no logging has occurred there and the area is free of roads and tracks.

The catchment was set aside by the Forestry Department for scientific and later, conservation purposes. The Great Walk has followed this management intent by using a minimal impact approach and locating the walking track and the walkers’ camps outside of the Bundaroo catchment.