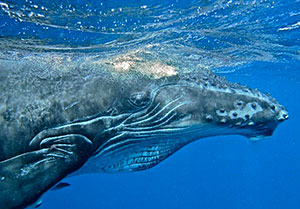 The sheltered waters of Hervey Bay in the Great Sandy Marine Park provide a resting area for humpback whales during their annual migration from the Great Barrier Reef to Antarctica. The majority of humpback whale sightings are within the eastern side of Hervey Bay, close to the western coast of K’gari (Fraser Island) between July and October each year.

The humpback whale (Megaptera novaeangliae) takes its scientific name from the Greek words megas meaning great and pteron meaning a wing. This aptly describes the whale’s huge wing-like flippers. It is the fifth largest of the great whales. Adult females grow to 15 m, slightly longer than males. A mature humpback can weigh 40 tonnes. They are listed as a vulnerable species under the Nature Conservation Act 1992 and as an endangered species under the Environment Protection and Biodiversity Conservation Act 1999 (Cwlth).

Each year the east Australian humpback whale population, approximately 30,000 animals1 migrates 6,000 km along the eastern coastline and arrive in the lagoons of the Great Barrier Reef about mid-June. Antarctic waters provide whales with their richest food source but the cold water is thought to be too harsh for newborn calves, which have no protective blubber layer.

Successful reproduction and nurturing is critical to the continuing recovery of the humpback whale species. Minimising human impacts throughout the whales’ journey is very important.