Beaches provide habitat for many species in Great Sandy Marine Park and provide connectivity between ocean waters and mainland coastal dune systems, up and down the coastline. Many beach habitats in the marine park are significant nesting beaches for marine turtles.

In low energy environments, soft sediment habitats characterised by silt, clay and mud and fine sand can form. Both soft (muddy) and sandy substrates may support marine plants such as seagrass, algae, mangroves and saltmarsh, however, they are also often bare of vegetation. Often seemingly ‘bare’ soft sediments have microalgae growing between the particles, which can be a food source for important fisheries species. Soft and sandy sediments provide important habitats for polychaete worms, prawns, bivalves, yabbies, mud crabs and fish such as sand whiting, tailor and yellowfin bream. There are also many small animals that live between the sand / sediment particles that provide a food source for other species. Soft sediment areas in the marine park are important areas for yabby pumping, fishing and crabbing.

Some of the important sandy and muddy substrate habitats in the marine park include: 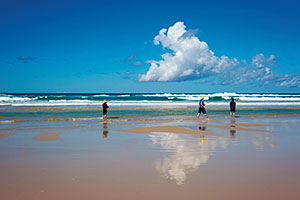