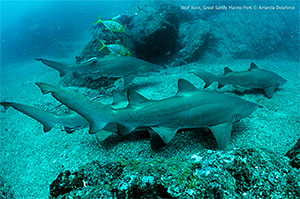 The grey nurse shark Carcharias taurus is one of Australia’s most iconic and endangered marine species - listed as endangered under the Nature Conservation Act 1992, critically endangered under the Commonwealth Environment Protection and Biodiversity Conservation Act 1999, and classified as protected under the Fisheries Act 1994. Recent research estimates approximately 2000 grey nurse sharks live along Australia’s east coast1, however, the breeding population consists of just 400 sharks (mature male and females) 2.

Wolf Rock, located just north of Double Island Point in the Great Sandy Marine Park is the most northern location of only four key aggregation sites for grey nurse sharks in Queensland3. This key site is used year-round by grey nurse sharks migrating from New South Wales to feed, mate and gestate.

Wolf Rock is critically important to the viability of the Australian east coast population as it is the only known gestation site for pregnant females on the east Australian coast. Around half of the mature female sharks in the population have been recorded at Wolf Rock. Pregnant females have a gestation period of about 12 months and spend a significant amount of that time around Wolf Rock before departing to their pupping waters in New South Wales (NSW) to give birth. Grey nurse sharks are not prolific breeders. They produce only one or two pups every two to three years4. Because of this slow breeding rate, the grey nurse shark population has been slow to recover from dramatic population decline.

Grey nurse sharks are protected by a Marine National Park (MNP) zone that extends 1.2km out from a central point at Wolf Rock. The 1.2km extent of the MNP zone is based on previous research in NSW that indicated grey nurse sharks made excursions of 1.2km from aggregation sites, mostly at night5. Contemporary research now shows that grey nurse sharks aggregating at Wolf Rock undertake excursions beyond the MNP zone, including to areas of connected habitat, and have been recorded at The Pinnacles, Round Rock, and around the base of Double Island Point6. Most of these excursions are undertaken at night and can last days or weeks before the shark returns to the central Wolf Rock pinnacle formations.

The greatest threat to the recovery of the Australia east coast population of grey nurse sharks is indirect bycatch – either in recreational or commercial line fishing gear or in shark control equipment. These sharks swallow fish whole and hence fishing hooks as well, instinctively targeting a fish that is retreating to deeper water after being hooked, resulting in sharks being hooked themselves. Some fishers may not know they have hooked a critically endangered grey nurse shark and perceive a ‘bite off’. If sharks survive the initial injury or trauma sustained from being hooked, a large portion of these swallowed hooks end up in the shark’s stomach and migrate through the digestive tract creating internal injuries that can cause the death of the shark. Hook ingestion can also result in malnutrition and wasting away which subsequently affects the reproductive potential of females with flow on effects to the viability of the Australian east coast grey nurse shark population.