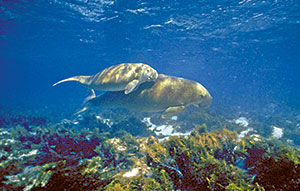 The dugong (Dugong dugon) is a large herbivorous mammal that spends its entire life in the sea. Adult dugongs feed predominantly on seagrass and can eat 30 kg of seagrass per day. These fascinating sea mammals leave tell-tale feeding trails through the seagrass beds. Dugong mature at between 10 and 17 years of age and can live for up to 70 years. A cow only reproduces every 3 to 7 years. After giving birth, she nurses and nurtures her calf for 1–2 years. Being mammals, dugong calves suckle milk. Dugong are listed as a vulnerable species under the Nature Conservation Act 1992.

Dugongs are generally found in coastal waters such as shallow, calm, wide protected bays but can also be spotted in estuarine creeks, streams and offshore waters. Surveys of coastal waters from the Gulf of Carpentaria, through the Torres Strait and down the east coast of Queensland, found the waters of the Torres Strait and Hervey Bay had the highest densities of dugongs, highlighting the importance of these areas to dugongs. Estimates of dugong abundance in the Great Sandy Marine Park from aerial surveys undertaken since 1988 vary from 579 to 2547 individuals1. The latest research from these aerial surveys suggests the dugong population has not significantly increased since 2005, and the percentage of calves in the population has also remained stable over this time period2. The lowest estimates are a result of movements away from the area and mortality after extreme weather events such as floods. It can take months for the impacts of flood events to be seen in the dugong population. The mortality of dependent calves can be significant if the food supply fails, therefore protecting and maintaining seagrass meadows is vitally important for this threatened species.