Discover more about the park’s plants by purchasing a copy of the ‘Ranger field guide: Native plants of Glass House Mountains National Park’. They can be purchased over the phone or by visiting a sales outlet. 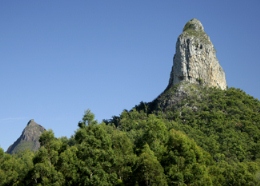 Mount Coonowrin, like other peaks in the Glass House Mountains, is an example of a volcanic plug. Photo: Ross Naumann, QPWS volunteer.

Since March 1999, the Mount Coonorwin section of Glass House Mountains National Park has been a Restricted Access Area under the Nature Conservation Act 1992. This effectively closes the area to public access in the interests of public safety.

We appreciate your co-operation in protecting this special area and being responsible for your safety.

To reduce injury and death in this high to very high risk of rockfall area.

The management decision to declare a restricted access area was made based on the recommendations of a geological report The Coffey report: Stability assessment, Mount Coonowrin, 12 April 1999.

Past recorded injuries and deaths associated with rock climbing at this site include:

People found within the Mount Coonowrin restricted access area will be fined under the Nature Conservation (Protected Areas Management) Regulation 2017.

There are several alternative locations for rockclimbing and abseiling in the Glass House Mountains area:

Other climbing sites in protected areas of the Sunshine Coast and Gympie area include: